The performance advantages of 10-bit A/D converters in oscilloscopes

Today, electronic designs are highly integrated components and are based on various technologies. If you want to measure small parts of signals in the presence of large amplitudes, you need an oscilloscope with a high vertical resolution. Digital oscilloscopes typically have a vertical resolution of 8 bit. But a 10-bit analog-to-digital converter (ADC) has four times more resolution than an 8-bit ADC. You can see signal details much more precisely.

Digital oscilloscopes are essential measuring instruments in electronic research, education and industry. When selecting a suitable oscilloscope, bandwidth and sample rate are often the main factors to consider. Memory depth and usability (including screen size) are further aspects. And in a growing number of applications, more than 8-bit vertical resolution is not only helpful but sometimes also necessary. Besides using A/D converters with a higher resolution, there are several methods available for increasing vertical resolution. Two often-used methods are averaging and high-resolution acquisition modes; both will be discussed in this article.

Today there are A/D converters available with 10-bit or even 12-bit resolution and sample rates, which typically support bandwidth up to 1 GHz. Still, the higher price compared with 8-bit components has up to now prevented their use in instruments with a starting price of less than about EUR 5,000. The new R&S RTB2000 oscilloscopes use the proprietary 10-bit A/D converter that Rohde & Schwarz originally developed for the R&S Scope Rider, the industry’s first isolated portable, multifunctional oscilloscope with options such as MSO and serial triggering and decoding of serial protocols. Using this proprietarily developed component in the R&S RTB2000 makes it possible to achieve a significantly higher vertical resolution compared with oscilloscopes that have an 8-bit A/D converter, while keeping the starting price at EUR 1,250.

Today, because voltage levels keep sinking and power supply efficiency requirements continue to rise, the tolerances when measuring electronic circuits are decreasing. As a result, the more accurate and the higher the resolution for voltage measurements, the better for the engineers. The following table shows the difference between 8-bit and 10-bit resolution. The example calculation for a 1 V signal yields a resolution of around 1 mV for the 10-bit converter. Developers who want to analyze signals of power electronics or who work with high dynamic ranges benefit from the signal measured with a resolution that is four times higher.

There are different methods for improving the vertical resolution of an oscilloscope, besides using an A/D converter. The two most common ones are averaging and high-resolution (HiRes) acquisition modes.

A common method for increasing resolution is the use of averaging. This is typically provided as a math functionality of the oscilloscope. This algorithm relies on averaging multiple consecutive acquisitions. As more acquisitions are averaged, the better the achievable resolution will be. An advantage of averaging is that it also reduces wideband noise, making the representation of the measured signal more accurate. However, there are two important disadvantages of this method:

It only works with repeating signals, such as clock signals.

Most signals do not repeat periodically, however, which means that averaging over several acquisitions cannot be used.

More and more oscilloscopes support special acquisition (sometimes also called decimation) modes, referred to as “HiRes”, i.e. high resolution. This method exploits oversampling, resulting from a higher A/D converter sampling rate than the sampling rate needed for accurate signal reconstruction in line with the Nyquist criteria. The additional samples are averaged and the resulting waveform is displayed. Since averaging is done within a single acquisition, this method yields higher vertical resolution also for nonrepeating events. Theoretically, the gain in vertical resolution is calculated as . The variable N here represents the factor for oversampling. In order to gain e.g. two additional bits, a factor of 16 is required.

If an oscilloscope has a max. sampling rate of 1 Gsample/s and an 8-bit A/D converter, it will have a decimated sampling rate of 62.5 Msample/s at 10-bit vertical resolution in HiRes mode. The following graph shows the relation for this example. This calculation reveals lower digital bandwidth as the main drawback using the HiRes mode. 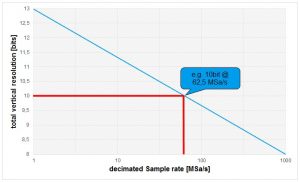 After this theoretical discussion of the different methods,  the following example will illustrate the effect of higher ADC resolution. The test signal used is an exponentially damped sine function, which is a relatively strong pulse with damped amplitude to both sides. This is a highly dynamic signal, and we will examine the small details. A signal of this type is available as a predefined function in many waveform generators, including the built-in waveform generator of the R&S RTB2000. The signal is connected to an R&S HMO2024, an oscilloscope well known for its excellent low-noise acquisition path with 200 MHz bandwidth. This oscilloscope uses a very good off-the-shelf 8-bit A/D converter. The same signal is fed in to the new R&S RTB2000, the successor of the R&S HMO2024. The R&S RTB2000 includes an integrated 10-bit A/D converter developed by Rohde & Schwarz. 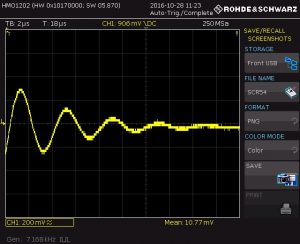 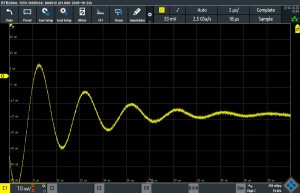 It is clearly recognizable that the four times higher resolution of the R&S RTB2000 A/D converter combined with the low-noise frontend gives more detailed information and allows more accurate measurements. If the zoom is set so that vertically and horizontally the same signal segment can be seen in both oscilloscopes, the difference becomes even more visible. On the R&S HMO, you can see the least significant bit of the 8-bit A/D converter, represented by the step-like display. 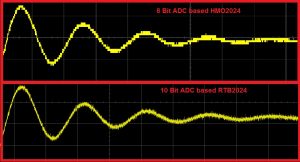 The vertical resolution of an oscilloscope is becoming more and more important due to new applications with lower voltages and smaller voltage differences. This article discussed different methods for increasing vertical resolution beyond the typical 8-bit resolution. In addition, the difference in using an 8-bit vs. a 10-bit A/D converter was explained theoretically and illustrated using a real-world example. It was shown that users of an oscilloscope such as the R&S RTB2000 with a very low-noise frontend and a 10-bit A/D converter can measure considerably more details of a signal than with a conventional oscilloscope equipped with an 8-bit A/D converter.