Can a future city be ‘smart’ enough to power itself?

When talking about the smart city of the future, all the elements one can think of sum into a keyword, connectivity. Whether they are driverless spaceship taxis or full self-functioning skyscrapers, the advancements that make a city smarter are supported by connected networks of information, technology interfaces and infrastructure.

Humans have actually been working for centuries to construct a city that can better respond to residents’ needs and increase their quality of life from safety, convenience, living conditions and other key aspects. As the world walks into the fourth industrial revolution to embrace the convergence of digital and physical environment, this goal becomes closer in reach. 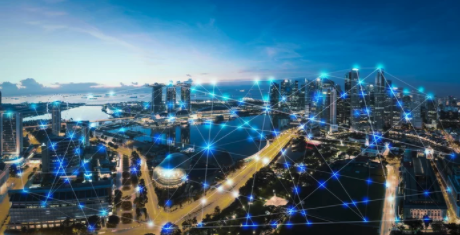 One of the first steps is to build upon digital interfaces, enabling high-speed internet and installing Internet of Things (IoT) devices to collect and utilize responsive data from residents’ everyday life. As of March 2021, there are more than 10 billion active IoT devices worldwide, and that number keeps rapidly growing. As cities implement more intelligent devices and IoT-enabled infrastructure components, the electricity demand will be enormous and delivering stable power is crucial.

IoT devices usually contain three major units that require electricity. The total energy consumption varies on the collective demand from each unit, which includes sensors for data collecting or actuators for performing a task, the processing units and the Machine to Machine (M2M) communications units that support data exchange between different networks. The last one is usually the biggest variable because this unit can cause intensive energy use if the device is involved in active data exchanging tasks. For smart city IoT devices particularly, this unit usually functions 24/7, exchanging massive volumes of live data between a central smart web and a local facility – for example, the smart utility meters. The meters attached to the building are also connected to a smart energy grid to share the live usage of water and electricity so the utility companies can better monitor the energy consumption. Many IoT and Industry 4.0 applications use a 3V coin cell as the power source because it costs less and provides a stable supply, but the drawbacks of batteries are also significant.

The limited life spans of batteries require constant replacement or recharge, which can cost an unimaginable amount of human and financial resources, especially if the devices are located in hazardous areas with limited access. Another drawback is the environmental unsustainability that will inevitably appear with the growing demand and usage of batteries. Both disadvantages can largely hinder the maturity of a smart city. Therefore, it is vital to find an alternative powering solution at this transitional stage. The conversation of powering should also go beyond building traditional public charging outlets or creating longer lifespan batteries but dive into real innovations among powering technologies.

Why we need an alternative to Qi charging

Wireless powering is not a strange concept to the market. The term has frequently appeared in advertisements of contact wireless charging pads, buckets and other consumer electronics. However, most of the devices and technologies available in the market today, such as Qi charging — the most common wireless charging protocol — are using magnetic induction technology that has existed in the industry for almost 60 years. It functions with two built-in charging coils in the device and in a transmitter. Even though as the most used wireless charging protocol, the limitation of induction charging is obvious: distance. The distance between the device and the transmitter needs to be within a few centimeters to realize induction charging.

Looking at some emerging wireless powering technologies, one innovation that stands out is smart radio frequency (RF) lensing, a technology that transmits power between two destination points without using any wires or physical induction pads in between. By using millimeter-wave (mmWave) to deliver electric power through the air, this RF lensing technology can transmit power nearly as fast as via wires to multiple devices simultaneously from many feet away, realizing true over-the-air (OTA) powering.

Even though an ideal solution is still under development and not yet available on the market, the current progress in the cordless charging landscape draws a hopeful blueprint. A smart city of the future needs a digital ecosystem that can provide a sustainable power supply to support digital interfaces and technology hardware updates. The world is still discovering future possibilities and the exploration in the science of power should be an ongoing agenda.

Behrooz Abiri is cofounder and CTO of GuRu Wireless, Inc., located in Pasadena, CA. He can be reached at abiri@guru.inc. GuRu is a millimeter-wave (mmWave) technology company in Pasadena CA that develops products for business and people who want to stop running wires, changing batteries, or plugging things in.