It is needed in several markets – including healthcare and industrial

Non-thermal plasma or cold atmospheric pressure plasma is a plasma where only electrons are thermalized. Thermal plasma treatment is already in use in various applications in the industrial market, however, it utilizes significant energy to produce thereby becoming expensive. On the other hand, non-thermal, or cold plasma is much more efficient to produce. It is needed in several markets – including healthcare and industrial – for surface treatment, cleaning and odour reduction, and other applications. 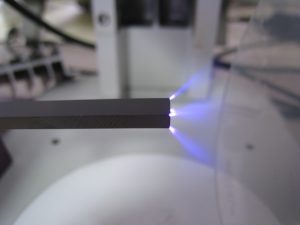 Cold atmospheric pressure plasma is ignited directly in air at the corners of the output side of the CeraPlas by driving the component with a sinusoidal voltage of 12 to 24Vpp at 50kHz.

Piezoelectric direct discharging is the most efficient way to create cold plasma. Plasma is formed when gas is ionized and is one of the four fundamental states of matter. It also has conductive properties.

Typically, plasma-generating devices require very high voltages in order to operate, which in turn, require high-voltage transformers or generators. As a result, high-voltage power supplies and the plasma generating unit are typically designed in separate housing for safety reasons. And, additional safety measures are needed to protect users from exposure to these high voltages.

As a result, existing plasma generators are bulky and typically require specific process gasses. Cold atmospheric pressure plasma generators on the other hand – like those from TDK Electronics subsidiary Relyon Plasma – are designed to be compact, lightweight and easy to use. Such devices do not need high-voltage power and can operate on standard batteries, supporting a wide-range of process gasses.

The input side of a Rosen-type design of ceramic piezo transformer and plasma generator features a multilayer structure with copper inner electrodes, while the output side of the transformer has a monolithic structure.

In order to create such devices, a single, ceramic solution is needed. These components are typically built using multilayer ceramic technology that allows the efficient generation of cold plasma. Due to its multilayer properties, such components can both generate plasma and act as a voltage transformer within the same device.

While the plasma generation takes place on the monolithic output side of the component, the device is designed to act as a multilayer Rosen-type piezoelectric transformer, generating the high voltages required to create cold plasma. 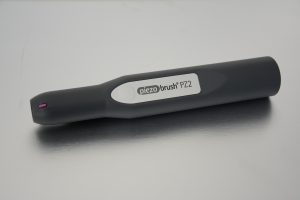 The input side features a new hard PZT (lead zirconate titanate) ceramic material that can be co-fired with internal copper electrodes. The result is good electromechanical coupling and low losses combined with a highly-stable mechanical quality factor over a wide range of strain.

The formation of a standing acoustic wave ­transforms the low voltage from the input side to a high voltage at the mechanically coupled output side at resonant frequency. The piezoelectric transformer can be contacted and mounted at the vibration nodal points without disturbing its mechanical movement because it operates at the second harmonic vibration mode.

Since the piezoelectric transformer functions as a dielectric electrode, there is no need for the traditional discharge electrode employed by DBD solutions. Rather, charges collect on the surface of the dielectric material where high-electric fields are situated and discharged in microseconds. This leads them to reform elsewhere on the surface. As long as the energy source provides sufficient ionization the plasma is sustained just like other electrical discharge methods.

Ceramic components are typically compact in size and weight. Yet, they also feature low-power consumption as they require a low input voltage while maximizing output voltage. Compared to conventional plasma generation techniques, these components achieve a more effective surface activation at very low power. Such components are easily integrated into different plasma source concepts without the need for external high-voltage safety measures. This leads to smaller devices that feature outstanding performance regarding plasma temperature and surface activation and can be used in a wider range of applications.

Voltages up to 20 kV can be reached at the output of multilayer ceramic components with a sinusoidal voltage of 12 to 24 Vpp. This is high enough to create a discharge in both the air as well as other industrial gases including argon and nitrogen. The plasma’s temperature remains below 50 °C and as a result works for treating the surface of temperature-sensitive materials.

Plasma sources based on this technology feature outstanding performance in comparison to existing low-power plasma generators. The overall plasma generator concept requires only a low-voltage power supply, the driver, the component, and a supply of gas. As a result, it can enable a wide range of designs for plasma generation units from handheld devices up to integrated modules for industrial applications to simple pen-style designs.

The first cold plasma product on the market based on this technology is the piezobrush PZ2, a wear-free cold atmospheric pressure plasma source that was developed by Relyon Plasma in close cooperation with TDK. The piezobrush PZ2 is a compact handheld device that needs no external processing gas. The plasma is ignited by TDK’s CeraPlas piezo plasma generator in the gas flow and features high activation efficiency. Due to its low plasma temperature of less than 50 °C, the piezobrush PZ2 can be used to activate temperature-sensitive materials. These features combined with its compact size show the high potential for implementation in handheld devices and industrial plasma applications.

Creabis, a 3D printing service provider based in Germany is using the piezobrush PZ2 in the processing of 3D printed parts. In one project, for example, Creabis 3D prints the interior door trim of a small electric series vehicle in four individual parts. These parts are then activated with cold plasma and spotted with cyanoacrylate (superglue). About an hour later as a final step, while the parts are still activated, they are structurally bonded with a two-component adhesive. In another project, Creabis manufactured motorcycle fairing consisting of 12 individual parts. Thanks to the activation of the bonding surfaces with the piezobrush PZ2, the bond is three times stronger than without surface activation.