Kitchener-based turn-key ecosystem on its way to becoming the world’s largest IoT manufacturing space, spurred by its ‘pay it forward’ mentality

If your design world revolves around the Internet of Things (IoT), you should be aware of Catalyst137, because there’s some really cool stuff happening there. 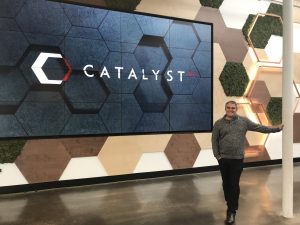 Kurtis McBride, co-founder and ‘chief hype guy’ for Catalyst137 is also CEO of Miovision, a tenant within the Kitchener-based IoT innovation centre.

Kurtis McBride, the driving force and steward behind the project has a vision of the Kitchener Ontario-based innovation hub becoming one of the world’s leading development centres for IoT designs. Located at 137 Glasgow St, the 475,000-square-foot former car tire factory has been converted into a hub of burgeoning, high-tech hardware companies.

Representing a one-stop-shop for anyone involved in IoT design, Catalyst137 clusters together everything hardware designers need to get to market quickly in the IoT sphere, whether it’s help with prototyping, certification, IT, industrial design and branding, even component sourcing.

“This place is designed for entrepreneurs by entrepreneurs,” says McBride, who aside from being co-founder & ‘chief hype guy’ for Catalyst, resides as CEO of Miovision, also a tenant within the facility. 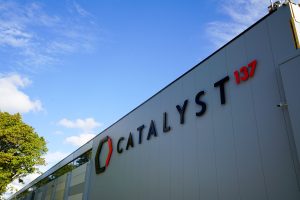 “Catalyst137 is a sum of its own parts, so each of us (tenants) have a vested interest in strengthening it, which often means lending our own brands to strengthen the Catalyst brand.”

Catalyst is described by McBride as a brand vessel – housing all of the uniquely different individual brands under one roof.

The facility itself is best described as a mall comprised with tenants, each representing a portion or segment of the electronics design cycle. McBride identifies two classes of tenants within Catalyst, including amenity and service providers, along with the user-class occupant. The facility sits on property that is equivalent to 24-acres in size, whereas the building consumes about half of that – the other half allocated to parking spaces. The work environment here for the more than 2,000 employees of approximately 30 different firms is convivial – it is collaborative –  or, as McBride puts it “operates within a very pay it forward culture.” 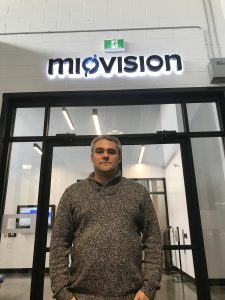 “The brand is more than a physical building filled with tenants who sign leases – that is not what the brand is all about. It is about bringing people together to help each other to build companies and create wealth for the country.”

Sitting at just over 80% capacity (at time of writing), the community of start-up peers boasts a variety of tenants. Leading the way as anchor tenant is McBride’s own firm, Miovision, which creates smart city intelligent solutions for in-house and outsourced traffic data collection and advanced traffic signal operations.

“Sustainability was very important to us, we wanted to make sure that we have a model that wasn’t going to fall apart if the existing political support on tech changes. We want it to be a sustainable model,” McBride says. “All of the tenants sign leases like they would anywhere else. Thus, they must be viable commercial entities with business models. The idea there is you can deliver all of these different services, but there is no need for the government to prop it up with support. It supports itself.”

While vetting prospective tenants, McBride says he looked at the landscape as an emerging designer and thought about what types of services are necessary to launch a concept. Once it was determined – he went out to source best-in-class players in each bucket. It was important to determine that they service the IoT ecosystem, as well as being capable of paying their rent. McBride did turn away a number of entities that sought to join, as it was determined to be too much of a stretch. 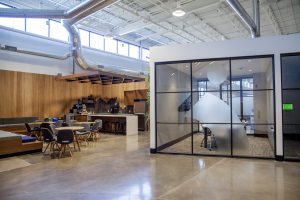 The Catalyst campus is described as a brand vessel that houses uniquely different IoT-based firms and services.

“If you are a company that focuses on creativity and technology to drive a business model – that is a match with our perspective,” he says.

Also part of the model was to ensure that Catalyst137 allocated a small percentage of its available space to small three to 10-person start-up companies.

“It will serve as a late-stage incubator for firms that are growing and taking next stage steps, but are unsure of just how much space they will ultimately require,” he adds.

McBride points to the Kitchener/Waterloo Region as the obvious birthplace to such a concept. The decline and contraction of BlackBerry as Canada’s crown jewel of electronics leadership, spread the seeds of tech knowledge around the community, spawning hundreds of new tech firms as a result.

“We have a density of talent here, not just engineering talent, but all the supporting talent that goes around it,” says McBride. “It is probably pretty unique, not just in Canada, but anywhere in the world. Some of that talent left town – but, a lot of it is still here. I like to think Catalyst delivers opportunity by providing a physical density and a brand vessel to communicate that capability.” 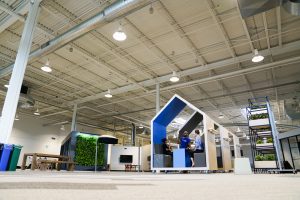 The culture is about bringing people together to help each other out – to build companies and create wealth for the country.

Lending support to the collaborative working environment, the facility’s common areas include a gym, café and a brew pub, while a 6,000-square-foot special event space at the front of the building is offered up for free to all Catalyst tenants. McBride stresses the importance of clustering together capabilities, talent, capital and culturally aligned companies – then step back and let ‘it’ happen.

“You don’t know is really going to happen, but things will happen,” he says.

There’s a very ‘pay-it-forward’ vibe to it

“The Catalyst brand is more than a physical building filled with tenants who sign leases – that is not what the brand is all about. It is about bringing people together to help each other to build companies and create wealth for the country,” says McBride. “We all compete for talent, capital and to a lesser degree customers. We tend to look past all of that and tend to focus on the idea that ‘rising tides raise all boats – and there is a very ‘pay-it-forward’ vibe to that,” he adds.

“As for our journey in the next five years? Who knows what will come out of this place, but my sense is if you cluster all of these things in one place – Catalyst becomes a destination for other firms looking in.” 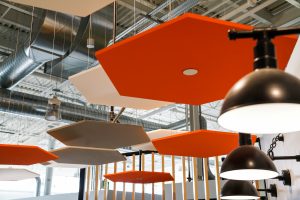 McBride serves example of a recent visit by Volkswagen, which stopped in for a tour of the facility because they heard about it.

“They asked to take a look around and who knows, maybe they’ll hang a shingle on our property one day. And, by doing so, maybe that creates business development opportunities for a little start-up that doesn’t exist yet,” McBride adds. “We will measure the success of this thing in reverse. We’ll get to the end and say ‘ya that is what we meant to happen’.”

To its advantage, Catalyst137 is situated roughly 3km from the University of Waterloo, considered as the ‘MIT of Canada’ and consistently ranked amid the top technical universities countrywide. Albeit mostly circumstantial according to McBride, the close proximity to graduating engineers does inject some synergistic energy.

“The feeling amongst many (UofW) graduates is that they often find a ready-made ecosystem that accepts them right here in Waterloo,” he says. “When you map out all of these different assets – it is a great place to come and build your business.”

McBride believes the KW region’s abundance of capabilities in engineering, design and product management helps draw talent in globally. He says this synergy of braintrust provides a ‘concentration of thought’ that the Federal and Provincial Governments can draw upon to run better innovation policy.

“How do we turn Canada into an innovation economy – much like Germany, USA, Japan and Korea – because those were not accidents – those were intentional,” he notes. “I think with this culture, there is a higher velocity of collective community learning, which actually then creates success – which begets success,” McBride continues. “The idea with this building is we want to create venues for that kind of collision that happens organically out in the community. We want to kind of take that organic osmosis culture that we already have and provide venues to amplify and accelerate it.”