Venturing out with two planes to service the forestry industry more than three decades ago, Harbour Air has emerged to become one of the largest all-seaplane airlines in the world and a vital piece of B.C.’s transportation infrastructure. With more than 450 staff and transporting more than 500,000 passengers each year, the Nanaimo-based airline recently partnered with an engineering firm, magniX, in an effort to pioneer the world’s first all-electric airline. 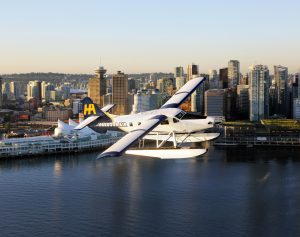 West Coast Report sat down with Harbour Air Seaplane’s founder and CEO, Greg McDougall, to learn what has aided their success so far, why they want to become an all-electric airline, and why they are so keen to tackle big obstacles in aviation.

Spend the summers at our family cabin on the coast

“I grew up in Santa Barbara, California, but came up to the B.C. every year to spend the summers at our family cabin on the coast which could only be accessed by float plane. I always knew I wanted to be a pilot and when I graduated in 1974 returned to Canada to begin flying,” says McDougall.

When he began his career, the culture of seaplane flying carried a wild west mentality. He recognized there was an incredible opportunity for these aircraft as a reliable way to get around the coast, however, it was imperative to elevate the safety, perception, and profession of seaplanes to that of commercial airlines. This is where they have earned their success, as McDougall explains: “Our steadfast focus on safety, innovation, and service was the breakthrough of our operation and certainly its ongoing success.”

The task of plane electrification is a challenging one. Harbour Air has been committed to sustainability by becoming the first fully carbon-neutral airline in North America in 2007, through the purchase of carbon offsets. They are now pushing the boundaries of aviation by becoming the first commercial airline powered by electric propulsion.

“The decision and vision to go electric, and specifically to operate the world’s first all-electric commercial flight, has been a goal of ours for a number of years. We are excited to bring commercial electric aviation to the Pacific Northwest, turning our seaplanes into ePlanes,” says McDougall.

The aviation industry is hung up on a traditional way of operating and is handcuffed by its dependence on jet fuel. On the other hand, Harbour Air, owing to their short-haul routes, aircraft size, and progressive agenda is in a unique position to morph into an electric airline. Their average flight time is 30-minutes, which makes electric propulsion a viable option. The pilot e-plane will come into service later this year.

“The first step currently being developed is the conversion of one of Harbour Air’s DHC-2 de Havilland Beaver aircraft, a six-passenger commercial seaplane used across Harbour Air’s scheduled destinations, to electric. Harbour Air and magniX expect to conduct first flight tests of the all-electric aircraft in late 2019”, explains McDougall. “From there the aircraft and components will go through certification and approval. Once approved we’ll look to expand the conversion across the entire fleet.”

When asked about whether Vancouver’s burgeoning tech community growth has helped Harbour Air, McDougall explained that “our passengers are split across the business community, leisure traveller and tourist and we have certainly seen growing demand from the tech sector, both on Vancouver Island, the Lower Mainland and especially with our growth across the Cascadia Corridor into Seattle”.

McDougall also shared a few secrets to his firm’s success: “I believe our success has come from staying true to our focus on innovation and growth. Surround yourself with awesome people, and keep them by striving to create a combination of excitement, challenge, and pride. And, disrupt or be disrupted! It is the new world order.”

Harbour Airlines operates 30,000 flights each year on 12 routes between Seattle, Vancouver, Victoria and other destinations in those areas.