2D materials, like graphene, consist of a single layer of atoms and are used in applications like flexible touch panels, integrated circuits and sensors. 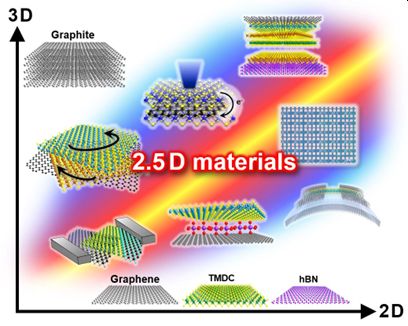 By stacking layers of different 2D materials, it is now possible to create 2.5D materials with unique physical properties that can be used in solar cells, quantum devices and devices with very low energy consumption. (Credit: STAM)

Recently, new methods have been introduced to make it possible to artificially stack 2D materials vertically, in-plane or at twisted angles regardless of their compositions and structures. This is thanks to the ability to control the van der Waals forces: weak electric interactions between atoms and molecules, similar to a microfiber cloth’s attraction of dust. It is also now possible to integrate 2D materials with other dimensional materials, such as ions, nanotubes and bulk crystals.

High nickel concentration as a catalyst

A common method for fabricating 2.5D materials is chemical vapour deposition (CVD), which deposits a layer, one atom or molecule at a time, onto a solid surface. Commonly used building blocks for 2.5D materials include graphene, hexagonal boron nitride (hBN) (a compound used in cosmetics and aeronautics), and transition metal dichalcogenides (TMDCs) (a nanosheet semiconductor).

Using the CVD method, researchers selectively synthesized a bilayer of graphene, the simplest form of a 2.5D material, using a copper-nickel foil with relatively high nickel concentration as a catalyst. Nickel makes carbon highly soluble, giving researchers more control over the number of graphene layers. When an electrical field was applied vertically across the bilayer of graphene, it opened a band gap, meaning that its conductivity can be turned on and off. This is a phenomenon that is not observed in monolayer graphene because it has no band gap and stays on all the time. By tilting the stacking angle one degree, scientists found that the material became superconducting.

Similarly, another group in the UK and the US found that a layer of graphene and hBN results in the quantum Hall effect, a conduction phenomenon involving a magnetic field that produces a difference of potential. Others showed that stacking TMDCs traps excitons (electrons paired with their associated holes in a bound state) in the overlapping lattice patterns. This can lead to applications in information storage devices. New robotic assembly techniques have also made it possible to build more complex vertical structures, including a stacked heterostructure consisting of 29 alternating layers of graphene and hBN, for example.

Other research has used the nanospaces that form between the layers of a 2.5D material to insert molecules and ions in order to improve the electrical, magnetic and optical properties of the host material.

So far, for example, researchers have found that graphene stabilises iron chloride when it is inserted between its stacked layers, while inserting lithium ions leads to a faster diffusion rate (how quickly molecules spread in an area) than that of graphite, an electrical conductor used in batteries. This implies the material could be used in high-performance rechargeable batteries.

Additionally, researchers found that inserting aluminium chloride molecules between two graphene sheets leads to the formation of new crystalline structures that are completely different from the bulk aluminium chloride crystal. More research is needed to understand why this happens and what applications it might have.

“There are many opportunities to explore with this new 2.5D concept,” Ago says.