Tools could provide unique insights for a variety of applications

Wireless sensors can monitor how temperature, humidity or other environmental conditions vary across large swaths of land, such as farms or forests. These tools could provide unique insights for a variety of applications, including digital agriculture and monitoring climate change. One problem, however, is that it is currently time-consuming and expensive to physically place hundreds of sensors across a large area. 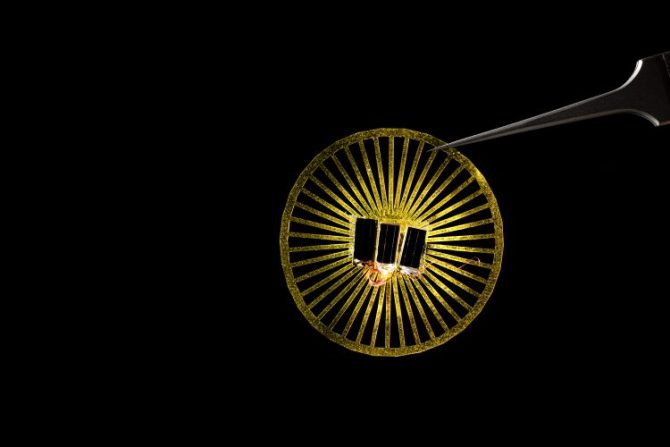 Inspired by how dandelions use the wind to distribute their seeds, a University of Washington team has developed a tiny sensor-carrying device that can be blown by the wind as it tumbles toward the ground. This system is about 30 times as heavy as a 1 milligram dandelion seed but can still travel up to 100 meters in a moderate breeze, about the length of a football field, from where it was released by a drone. Once on the ground, the device, which can hold at least four sensors, uses solar panels to power its onboard electronics and can share sensor data up to 60 meters away.

“We show that you can use off-the-shelf components to create tiny things. Our prototype suggests that you could use a drone to release thousands of these devices in a single drop. They’ll all be carried by the wind a little differently, and basically you can create a 1,000-device network with this one drop,” said senior author Shyam Gollakota, a UW professor in the Paul G. Allen School of Computer Science & Engineering. “This is amazing and transformational for the field of deploying sensors, because right now it could take months to manually deploy this many sensors.” 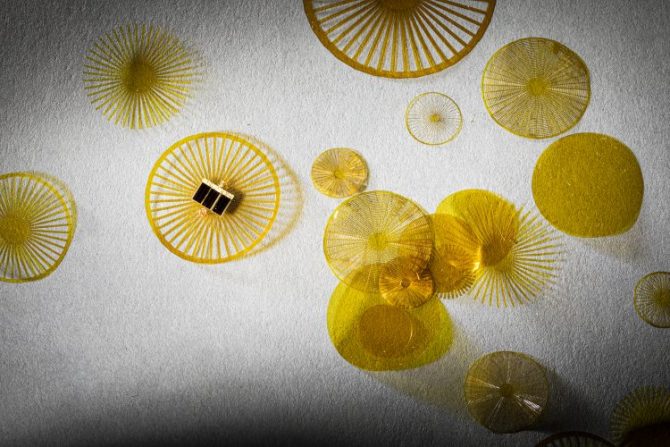 The researchers tested 75 designs, some of which are shown here in yellow. Source: Mark Stone/University of Washington

Because the devices have electronics on board, it’s challenging to make the whole system as light as an actual dandelion seed. The first step was to develop a shape that would allow the system to take its time falling to the ground so that it could be tossed around by a breeze. The researchers tested 75 designs to determine what would lead to the smallest “terminal velocity,” or the maximum speed a device would have as it fell through the air.

“The way dandelion seed structures work is that they have a central point and these little bristles sticking out to slow down their fall. We took a 2D projection of that to create the base design for our structures,” said lead author Vikram Iyer, a UW assistant professor in the Allen School. “As we added weight, our bristles started to bend inwards. We added a ring structure to make it more stiff and take up more area to help slow it down.” 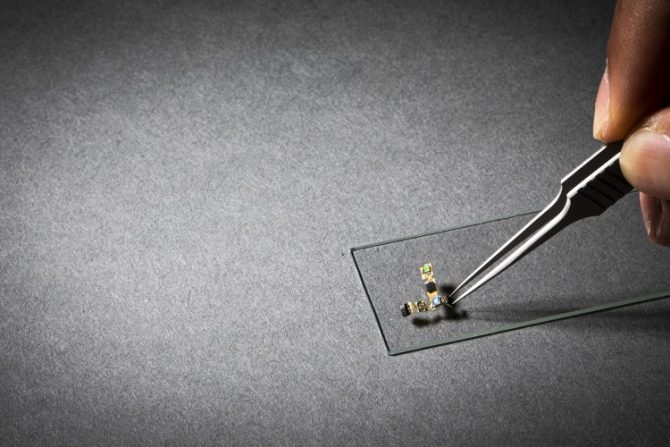 The device’s onboard electronics include sensors, a capacitor to store charge overnight and a microcontroller to run the system, all contained in a flexible circuit, shown here.Mark Stone/University of Washington

To keep things light, the team used solar panels instead of a heavy battery to power the electronics. The devices landed with the solar panels facing upright 95% of the time. Their shape and structure allow them to flip over and fall in a consistently upright orientation similar to a dandelion seed.

Without a battery, however, the system can’t store a charge, which means that after the sun goes down, the sensors stop working. And then when the sun comes up the next morning, the system needs a bit of energy to get started.

Designed to include a capacitor

“The challenge is that most chips will draw slightly more power for a short time when you first turn them on,” Iyer said. “They’ll check to make sure everything is working properly before they start executing the code that you wrote. This happens when you turn on your phone or your laptop, too, but of course they have a battery.”

The team designed the electronics to include a capacitor, a device that can store some charge overnight.

“Then we’ve got this little circuit that will measure how much energy we’ve stored up and, once the sun is up and there is more energy coming in, it will trigger the rest of the system to turn on because it senses that it’s above some threshold,” Iyer said.

How far devices travel in the wind

These devices use backscatter, a method that involves sending information by reflecting transmitted signals, to wirelessly send sensor data back to the researchers. Devices carrying sensors — measuring temperature, humidity, pressure and light — sent data until sunset when they turned off. Data collection resumed when the devices turned themselves back on the next morning.

To measure how far the devices would travel in the wind, the researchers dropped them from different heights, either by hand or by drone on campus. One trick to spread out the devices from a single drop point, the researchers said, is to vary their shapes slightly so they are carried by the breeze differently.

“This is mimicking biology, where variation is actually a feature, rather than a bug,” said co-author Thomas Daniel, a UW professor of biology. “Plants can’t guarantee that where they grew up this year is going to be good next year, so they have some seeds that can travel farther away to hedge their bets.”

Another benefit of the battery-free system is that there’s nothing on this device that will run out of juice — the device will keep going until it physically breaks down. One drawback to this is that electronics will be scattered across the ecosystem of interest. The researchers are studying how to make these systems more biodegradable.

Creating devices that can change shape as they fall

“This is just the first step, which is why it’s so exciting,” Iyer said. “There are so many other directions we can take now — such as developing larger-scale deployments, creating devices that can change shape as they fall, or even adding some more mobility so that the devices can move around once they are on the ground to get closer to an area we’re curious about.”

Hans Gaensbauer, who completed this research as a UW undergraduate majoring in electrical and computer engineering and is now an engineer at Gridware, is also a co-author. This research was funded by the Moore Inventor Fellow award, the National Science Foundation and a grant from the U.S. Air Force Office of Scientific Research.