UCF and NASA deliver lightweight, supercapacitor-battery hybrid composite material that is as strong as steel

Like the charged power suit worn by Black Panther of Marvel Comics, University of Central Florida (UCF) researchers have advanced NASA technologies to develop a power suit for an electric car that is as strong as steel, lighter than aluminum and helps boosts the vehicle’s power capacity.

The suit is made of layered carbon composite material that works as an energy-storing supercapacitor-battery hybrid device due to its unique design at the nanoscale level. The development appeared recently as the cover story in the journal Small and could have applications in a range of technologies that require lightweight sources of power, from electric vehicles to spacecraft, airplanes, drones, portable devices and wearable tech. 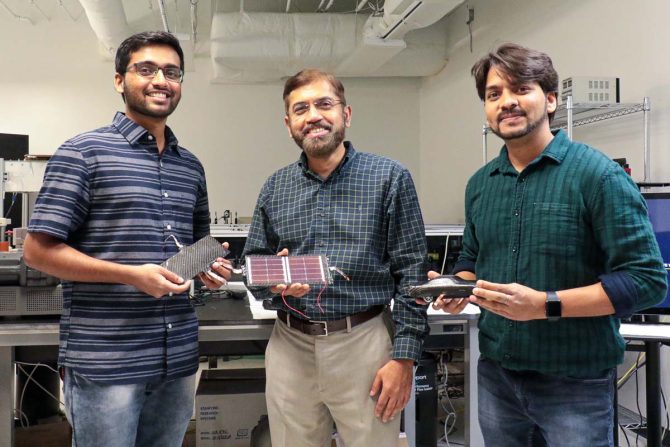 “Our idea is to use the body shells to store energy to supplement the power stored in batteries,” says study co-author Jayan Thomas, the team leader and a professor in UCF’s NanoScience Technology Center and Department of Materials Science and Engineering. “The advantage is that this composite can reduce the weight of your car and increase the miles per charge,” he says. “It is as strong as or even stronger than steel but much lighter.”

Technology advances in its readiness level

“This application, as well as many others, could be on the horizon one day as the technology advances in its readiness level,” says Luke Roberson, study co-author and a senior principal investigator for research and development at NASA’s Kennedy Space Center.

These materials could be employed as frames for cube satellites, structures on off-world habitats, or even as part of futuristic eyewear, such as mixed and virtual reality headsets.

“There are lots of potential infusion points within the economy as well as for future space exploration,” Roberson says. “This is, in my mind, a huge advancement of the technology readiness level to get us to where we need to be for NASA mission infusion.”

On cars, the supercapacitor composite material would get its power through charging, like a battery, as well as when the car brakes, Thomas says. 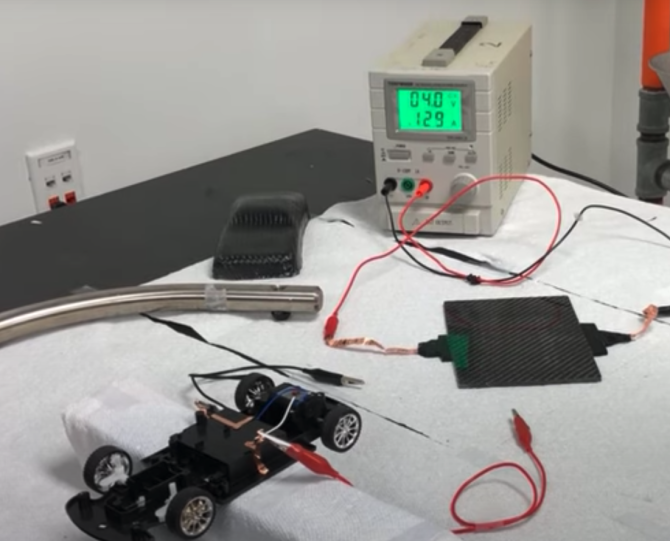 The materials used are also nontoxic and non-flammable, which is very important for passenger safety in case of an accident, he says.

“This is a huge improvement over past approaches that have suffered from issues with toxic material, flammable organic electrolytes, low life cycles or poor performance,” Thomas says.

Due to its unique design that uses multiple layers of carbon fiber, the material has significant impact and bending strength, essential for withstanding an auto collision, as well as significant tensile strength. To construct the material, the researchers created positively and negatively charged carbon fiber layers, that when stacked and attached in an alternating pattern, create a strong, energy-storing composite.

Deepak Pandey, the study’s lead author and a doctoral student in Thomas’ lab, worked on forming, shaping and optimizing the composite, as well as developing the method to add metal oxides to the carbon graphene strips. Study co-author Kowsik Sambath Kumar, a doctoral student in Thomas’ lab, developed a way to vertically align nanoscale graphene on carbon fiber electrodes. Kumar says one of the most important developments from this supercapacitor composite is that it is lightweight.

“Now in electric cars, the battery is 30% to 40% of the weight,” he says. “With this energy storing composite we can get additional mileage without increasing the battery weight, further it reduces the vehicle weight, while maintaining high tensile, bending and impact strength. Whenever you decrease that weight, you can increase the range, so this has huge applications in electric cars and aviation.”

Tested in a relevant environment

Pandey agrees and highlights its usefulness for the space sector.

“Making a cubic satellite out of this composite will make the satellite light in weight and will help to eliminate the heavy battery pack,” he says. “This could save thousands of dollars per launch. Further, free volume gained by removal of big batteries could help pack in more sensors and testing equipment, increasing the functionality of satellite,” Pandey says. “Supercapacitor-battery hybrid behaviour is ideal for cubesats since it can charge in minutes when a satellite orbits over the solar-lit side of the Earth.

Roberson says the technology is currently at a technology readiness level of five, which means it has been tested in a relevant environment before moving to being tested in a real environment, such as on a space flight, which would be level six testing.

To pass the last level of testing, level nine, and reach the commercial environment, it will require further development and testing focused on commercial applications, he says.