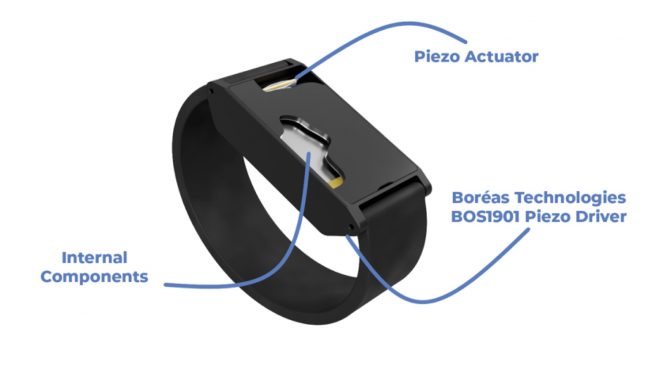 The Boréas PHE is a major advancement over the two legacy technologies that have dominated haptics in wearables and other small devices: linear resonant actuators (LRAs) and eccentric rotating mass (ERM) motors, in which the quality of haptic performance is tied directly to the LRA’s or ERM’s volume and mass. This architectural approach makes these platforms too large to achieve a satisfying user experience in wearables. In contrast, the Boréas PHE uses a small off-the-shelf piezo actuator and the mass of other internal components to generate exceptional haptic performance, eliminating the size-power-performance trade-off typical of LRAs and ERMs.

“The quality of haptic effects in smartwatches and fitness bands is vital to the user experience. This makes choosing a high-quality haptic engine essential to customer satisfaction,” said Simon Chaput, founder and CEO, Boréas Technologies. “But the dominant actuators generally used in wearables, LRAs and ERMs, generate inferior haptic effects at the small size needed for wearables, making your device feel cheap.

“Piezo actuators, on the other hand, don’t have this problem. Used with our Boréas PHE, they produce stronger, more realistic, and more responsive haptic experiences that are sure to delight users with the premium feel that they’ve come to expect. Plus, their small size and ultra-low power consumption tick all the boxes for devices in which every millimeter and microamp are critical.”

The advantages of the BPHE over the LRA—the haptic technology most commonly used in wearables—is measurable.