After a long period of relative inactivity where haptics research was confined to a fairly tight group of companies and academics, the industry is about to be significantly disrupted and transformed by newer technology options. 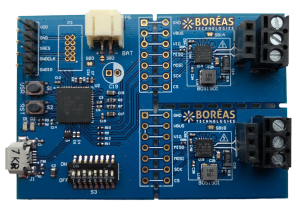 Boréas Technologies of Bromont Quebec is among the many new players emerging by developing new advanced haptics solutions. Boréas recently released its developer kits to the public for the first time, which is focused on piezoelectric actuators.

Boréas Technologies’ founder and CEO Simon Chaput and his development team identifies their technology as ‘HD haptics’ due to its fast response time, wide bandwidths, potential thin form factors and more. However, piezoelectric actuators typically require driving at high voltage, meaning issues with efficiency or distortion can lead to poor power consumption, noise and other challenges. These issues and others have meant that, despite their clear potential, piezoelectric actuators have failed to penetrate the larger main-stream markets in haptics.

Boréas aims to help overcome the challenge with piezoelectric actuators. The firm’s product, known as CapDrive was developed from the ground up to optimize power consumption, minimize noise and have a small form factor. The product was originally developed during Chaput’s PhD at Harvard, where the aim was to develop ultra-thin and efficient piezoelectric fans for cooling electronic devices. When commercializing the product, they recognized the potential for disruption in the haptics space, particularly due to the fact that there was only one main manufacturer of drivers suitable for piezoelectric actuators in the market previously.

Boreas gained initial validation from various partners and, as a result, the dev kits are available for testing, allowing a wider community to join their alpha test group in experimenting with this new technology.