Electronic control units (ECUs) are playing an increasingly critical role in the automotive industry, driving the development of safer, smarter, cleaner and better-connected cars. As a result, global automotive ECU revenue is expected to soar to $211 billion in 2030, rising at a compound annual growth rate (CAGR) of 5 percent from $122 billion in 2018, according to IHS Markit forecasts. This robust expansion follows a strong year in 2018, when revenue rose 6.9 percent from $114 billion in 2017. 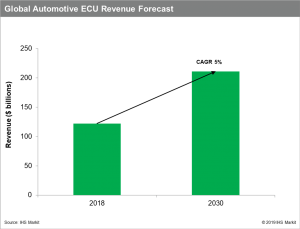 While their operations are largely invisible to motorists, ECUs are essential for keeping vehicles on the road, managing automotive subsystems including the engine, power-steering and transmission.

“As vehicles have added more features — like infotainment, telematics and advanced driver-assist systems (ADAS) – the number of ECUs in each vehicle has increased,” said James Priyatham, research analyst, automotive electronics and semiconductors at IHS Markit. “A single modern luxury vehicle now can integrate as many as 150 ECUs.”

The rise in ECU usage reflects the broader trend of increasing amounts of electronics in each new vehicle. The average value of in-vehicle electronics is projected to increase to $1,832 in 2030, up from $1,296 in 2018, according to IHS Markit forecasts.

Collectively, HEV and BEV ECUs accounted for just 3 percent of the total automotive electronics market in 2018, but are expected to rise to 15 percent in 2030. ADAS will grow to account for 29 percent of car electronics revenue in 2030, up from 17 percent in 2018.

Keeping the ECUs under control

While the proliferation of ECUs is enabling many new features in cars, the sheer multiplicity of devices is creating new challenges. In particular, the management of all the ECUs has become a complex task. To address this issue, carmakers are seeking to reduce the number of ECUs in each vehicle by consolidating capabilities into fewer devices.

“With a CDC architecture, ECUs require less functionality, with many of their capabilities centralized on the domain controller.” said Brian Rhodes, connected car research lead at IHS Markit. “As a result, some ECUs are becoming ‘dumb,’ meaning they lack features like a system-on-chip or memory.”

The consolidation will cause global automotive infotainment electronics revenue to flatten out, according to IHS Markit forecasts. This is expected to occur as some infotainment-oriented ECUs are replaced partially or completely by a CDC.

Major automotive suppliers Continental and Bosch dwarf the competition in the global ECU market. The two companies together accounted for 28 percent of the total ECU market in 2018. Despite attempts to consolidate, ECU usage is set to continue to expand in the coming years as the growing feature-set of cars outstrips efforts to reduce ECU usage.