Global power semiconductor revenues grew year-over-year by 3.9 percent in 2016, reversing a 4.8 percent decline in 2015, according to a recent report from business information provider IHS Markit. 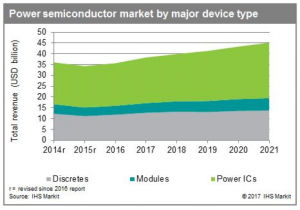 All categories of power semiconductors (power discretes, power modules, and power integrated circuits) were up for the year, with the discretes market seeing the biggest jump. Sales in all regions increased, with China revenues topping the list. IHS Markit expects the market to grow by 7.5 percent in 2017, to $38.3 bill and achieve yearly increases through 2021.

Automotive and industrial lead the way

The automotive and industrial segments were particularly strong in 2016, with power semis in automotive growing by 7.0 percent and industrial by 5.0 percent. Advanced driver assistance systems (ADAS) – such as blind-spot detection, collision avoidance, and adaptive cruise control – are moving from luxury to mid-level vehicles, driving double digit increases for power semiconductors in that category.

Despite good gains, other categories were flat to down. Power module sales for industrial motor drives, a large sub-segment, slid 1.1 percent and modules for traction applications were down 17.5 percent for the year.  Power ICs for consumer application declined 4.9 percent while power discretes for lighting applications were off 2.7 percent.

“The industry megatrends of vehicle electrification, advanced vehicle safety, energy efficiency and connected everything will continue to drive growth over the next five years,” said Kevin Anderson, senior analyst, power management for IHS Markit. “IHS Markit predicts that the compound-average annual growth rate (CAGR) from 2016 – 2021 will be 4.8 percent.  Regionally, the highest growth is projected in China, at 6.0 percent CAGR, followed closely by the rest of Asia including Taiwan, Europe, Middle East and Africa, and the Americas – all with projected growth over 5 percent.”