For its first debut in Toronto, North America’s fastest-growing technology conference has finally kicked off, announcing its final figures for the event. Collision welcomes 730 speakers across 15 tracks, debating the most pressing issues in tech and the world today. Here are some insights on who else is here for the week. 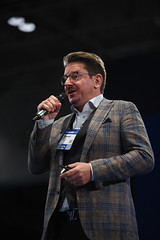 Metod Topolnik, CEO, SimplePin, on PITCH stage during day one of Collision 2019 at Enercare Center in Toronto, Canada. Photo by Eóin Noonan/Collision via Sportsfile

Collision has hit its target for year one, with 25,711 attendee, from 125 countries. The technology conference has surpassed its ambitious target of 25,000 attendees for its first year in Canada, reaching a total of 25,711 people, from 125 countries, who will descend on the city for the week. After Canada and the United States, the top attending countries come from across the world; from countries such as Germany, Brazil, India and Nigeria.

The best gender ratio so far, 45.7% of Collision attendees are female. This has been the best result the company has had so far, compared to last year’s Collision in New Orleans, where the percentage was at 42.5%. The gender ratio even improves upon the event’s flagship event, Web Summit, where in 2018, 44.5% of the conference’s attendees were female.

The event welcomes 1,100 startups, 83% more than last year. Startups attending Collision come from over 60 countries. Top representing countries include Colombia, the Netherlands, the UK and Mexico. With Toronto being the business and financial hub of Canada, and also home to the Godfather of AI, Geoffrey Hinton, it’s no surprise the artificial intelligence and fintech industries are among the top three industries of startups showcasing their work, alongside those from enterprise software solutions. 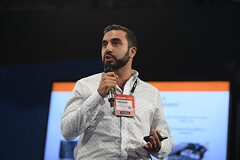 Michael Filippakis, CEO and Founder, MFlux Lighting, on PITCH stage during day one of Collision 2019 at Enercare Center in Toronto, Canada. Photo by Eóin Noonan/Collision via Sportsfile

About Collision Known by Inc. Magazine as the “fastest growing tech conference in North America”. Now in its fifth year, Collision has grown to over 25,000 attendees and is in for a big change in 2019. Following three sunny, jazz-filled years in New Orleans, Collision has moved to Toronto, held from May 20 – 23 at the Enercare Centre.

Whatever Web Summit is, it wouldn’t be possible without a team of over 200 employees; including world class engineers, data scientists, designers, producers, marketers, salespeople and more. They’ve disrupted an old industry by building incredible software and designing mind-blowing events – revolutionising how people and ideas connect to change the world.

As one of the world’s largest gatherings of entrepreneurs, investors, multinationals and more – over 120,000 people join Web Summit in Lisbon, Collision in Toronto, and RISE in Hong Kong.