Global semiconductor industry revenue grew 4.4 percent, quarter over quarter, in the second quarter of 2018, reaching a record $120.8 billion. Semiconductor growth occurred in all application markets and world regions, according to IHS Markit, a world leader in critical information, analytics and solutions.

“The explosive growth in enterprise and storage drove the market to new heights in the second quarter,” said Ron Ellwanger, senior analyst and component landscape tool manager, IHS Markit. “This growth contributed to record application revenue in data processing and wired communication markets as well as in the microcomponent and memory categories.” 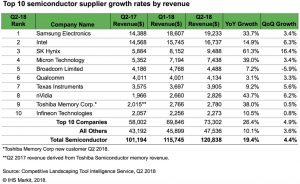 Due to the ongoing growth in the enterprise and storage markets, sequential microcomponent sales grew 6.5 percent in the second quarter, while memory semiconductor revenue increased 6.4 percent. “Broadcom Limited experienced exceptional growth in its wired communication division, due to increased cloud and data-center demand,” Ellwanger said.

Memory component revenue continued to rise in the second quarter, compared to the previous quarter, reaching $42.0 billion dollars. “This is the ninth consecutive quarter of rising revenue from memory components, and growth in the second quarter of 2018 was driven by higher density in enterprise and storage,” Ellwanger said. “This latest uptick comes at a time of softening prices for NAND flash memory. However, more attractive pricing for NAND memory is pushing SSD demand and revenue higher.”

Samsung Electronics continued to lead the overall semiconductor industry in the second quarter with 15.9 percent of the market, followed by Intel at 13.9 percent and SK Hynix at 7.9 percent. Quarter-over-quarter market shares were relatively flat, with no change in the top-three ranking. SK Hynix achieved the highest growth rate and record quarterly sales among the top three companies, recording 16.4 percent growth in the second quarter.