Global semiconductor industry revenue declined 3.4 percent in the first quarter of 2018 falling to $115.8 billion. Semiconductor industry performance was negatively affected by the declining sales and first-quarter seasonality in the wireless communications market. Other sectors, such as automotive and consumer semiconductors, experienced nominal market growth, according to IHS Markit (Nasdaq: INFO), a world leader in critical information, analytics and solutions.

The memory category experienced the highest growth of 1.7 percent in the first quarter, reaching $39.7 billion, as demand for memory components increased in the enterprise and storage markets. In fact, DRAM pricing and shipments both increased during the quarter, as strong demand for server DRAM continued to propel the semiconductor market. However, NAND began to show signs of softening, with slight revenue declines during the quarter, mainly due to single-digit price declines. “Even with the slight revenue decline during the quarter, the NAND market still achieved its second-highest revenue quarter on record, with strong demand coming from the enterprise and client solid-state drive markets,” said Craig Stice, senior director, memory and storage, IHS Markit.

Led by its dominant position in the memory market, Samsung Electronics led the semiconductor industry in the first quarter of 2018, with 16.1 percent of the market, followed by Intel at 13.6 percent and SK Hynix at 7.0 percent. Quarter-over-quarter market shares were relatively flat, with no change in the top-three ranking list. However, on a year-over-year basis, Samsung supplanted Intel as the leading semiconductor company, compared to the first quarter of 2017.

Analog component sales for Texas Instruments, Maxim Integrated, ON Semiconductor and other companies with a strategic focus on industrial and automotive industries managed single-digit sales increases in the first quarter. In contrast, analog component revenue declined by double digits for Qualcomm, Skyworks Solutions, Oorvo and other companies targeting the wireless industry.

Memory IC companies — Samsung Electronics, SK Hynix, Micron Technologies and Toshiba — continued to dominate the top ten semiconductor companies. Micron achieved the highest growth rate in the top ten, recording 9.8 percent growth in the first quarter, compared to the previous quarter. Qualcomm revenue fell 13.6 percent, which was the largest sequential drop, due to the weakness in the wireless communication market. Qualcomm and nVidia were the only two fabless companies remaining in the top ten. 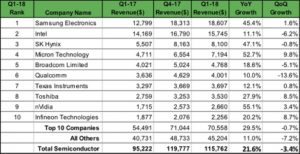