Sidewalk Labs ‘hadn’t foreseen’ how fiercely Canadians would demand that their data be retained within the country when it first sought out to design a ‘people first’ high-tech neighbourhood in east Toronto, says one of the local leaders working with the start-up, which is owned by Google’s parent company Alphabet. 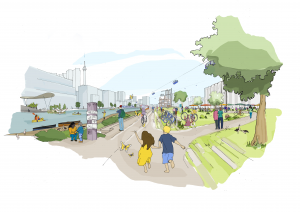 It was announced in October that Sidewalk Labs won a competition to partner with Waterfront Toronto to develop the Quayside neighbourhood “from the Internet up” with features including roads designed for driverless cars, environmentally friendly design and innovative infrastructure. Its plans will ultimately need government approval before any construction moves forward. The company held two public meetings on Tuesday night and was asked how its plans would address concerns about privacy, affordable housing and diversity. When asked by an audience member where the project’s data would be housed, Sidewalk Labs head of legal Alyssa Harvey Dawson said “security is going to be paramount,” but did not directly answer the question.

At the second meeting, she added that “we’re not answering it now today because we have a lot more work to do. This is part of the public engagement process, we think there’s an opportunity to be advised by our data governance board, once again by Waterfront Toronto, and by the folks in this room as to what’s the appropriate way to go forward.”

Kristina Verner, vice president of innovation, sustainability and prosperity for Waterfront Toronto, said she has found the American company “committed to the privacy piece,” but it needed to hear just how strongly Canadians would demand data protection “as part of their understanding of the Canadian environment.”

“Coming from the States they have a different sort of regulatory environment. One of the things that has been said loud and clear from some of the early advisers … is that data residency is one of those non-negotiables, it must be in Canada,” Verner told The Canadian Press after the first meeting.

“Part of the challenge is they hadn’t foreseen what a passion Canadians had for the data residency issue, so now it’s a matter of just engineering around that to make sure it’s actually addressed properly.”

On housing affordability, chief policy officer Rit Aggarwala said the company also heard “loud and clear” at a town hall in November that the issue is important to Torontonians, but admitted “frankly we’re still figuring that out.”

“Sidewalk Toronto will in some ways be judged a success if we make a dent in providing attractive solutions to the challenge of housing affordability and if we don’t, we cannot really consider ourselves truly successful,” he said.