A member of the panel guiding Sidewalk Labs’ plans to build a high-tech neighbourhood in Toronto has resigned. 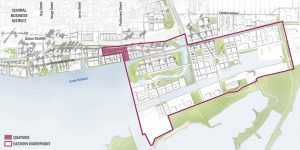 In a letter obtained by The Canadian Press, TechGirls Canada founder Saadia Muzaffar says she is stepping away from her role with the Waterfront Toronto Digital Strategy Advisory Panel because she has developed “deep dismay” and “profound concern.”

Muzaffar did not respond to requests for comment, but her note says she is frustrated that project-backer Waterfront Toronto has shown apathy and a lack of leadership regarding public trust and has dodged questions around privacy and intellectual property.

Muzaffar’s resignation follows that of Ontario Municipal Employees Retirement System executive John Ruffolo. The Alphabet Inc.-backed project has been marred in controversy for months because critics have complained those behind it have shared few details about their plans and given little explanation for how data will be collected, kept, accessed and protected.

Project spokesman Dan Levitan says in a statement that organizers take seriously questions around data and expect to present and consult with the public in the coming months.