So you want to learn how to program a quantum computer. Now, there’s a toolkit for that. 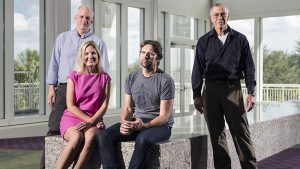 The Quantum Development Kit, which Microsoft first announced at its Ignite conference in September, is designed for developers who are eager to learn how to program on quantum computers whether or not they are experts in the field of quantum physics. It’s deeply integrated into Visual Studio, Microsoft’s suite of developer tools, so aspects of it will be familiar to people who are already developing applications in other programming languages. And it’s designed to work with a local quantum simulator, also released as part of the kit, that can simulate around 30 logical qubits of quantum computing power using a typical laptop computer. That will allow developers to debug quantum code and test programs on small instances right on their own computers.

For larger-scale quantum challenges, Microsoft also is offering an Azure-based simulator that can simulate more than 40 logical qubits of computing power. Along with the kit, Microsoft also is making a comprehensive suite of documentation, libraries and sample programs available. That will give people the background they need to start playing around with aspects of computing that are unique to quantum systems, such as quantum teleportation. That’s a method of securely sharing information across quantum computing bits, or qubits, that are connected by a quantum state called entanglement.

“The hope is that you play with something like teleportation and you get intrigued,” said Krysta Svore, a principal researcher at Microsoft who has led the development of the quantum software and simulator.

The kit will let people create applications that can run right now on the quantum simulator, and those same apps also will eventually work on a topological quantum computer, which Microsoft is in the process of developing for general purpose quantum computing.

“The beauty of it is that this code won’t need to change when we plug it into the quantum hardware,” Svore said.