Smart clothes are garments such as shirts, socks, and shoes that contain an embedded computing device that can monitor health statistics such as heart rate, respiration, skin temperature and oxygen saturation. 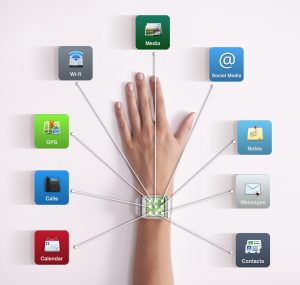 Closeup studio shot of a woman’s arm wearing a smartwatch surrounded by application icons – All screen content is designed by us and not copyrighted by othershttp://195.154.178.81/DATA/i_collage/pi/shoots/783764.jpg

ABI Research, a leader in emerging technology intelligence, forecasts that the smart clothing market will top 31 million device shipments annually by 2022, increasing from just under 5 million in 2017, a 45% CAGR. Smart clothing will have the second highest growth rate among wearable devices behind hearables over the forecast period, but will continue to have one of the lowest market shares of wearable devices. While smart clothing has yet to reach mass market appeal, the industry is continuing to grow due to current highly targeted consumer applications within the sports, fitness, and wellness markets.

“The majority of smart clothing shipments will be primarily driven by consumer applications, with growing enterprise applications in worker safety and monitoring over the next few years,” says Ryan Harbison, Research Analyst at ABI Research. “Today’s market targets mostly sports professionals, as the clothing offers more accurate readings than other wearables because it is so close to the skin and other vital organs. As vendors expand the use case potential, the technology will prove its worth, cut its costs, and reach a wider array of both consumer and enterprise users.”

Innovative players driving adoption include Sensoria, OMsignal, and Hexoskin. These companies are succeeding due to products that target very specific markets and address specific use cases. Recently joining these brands are giants such as Ralph Lauren, Google, and Levi’s. Given the market’s growing popularity, ABI Research expects it will only be a matter of time before some of the larger tech players enter this space, too.

“Before smart clothing reaches mass adoption, the technology behind its embedded sensors needs to improve,” continues Harbison. “The sensors have to withstand conditions that other wearables don’t, such as body sweat, wash cycles, and extreme temperature variances. Vendors will have to solve this through innovative manufacturing and do so before consumers voice these concerns.”

Many of today’s smart clothing products feature detachable sensors that must be removed before washing. If the sensors are stitched permanently into the fabric, the clothing will have a limited wash cycle. Even the most advanced products last for only 60 to 70 washes before they will have to be replaced.

“Vendors need to ensure that their products have rock-solid use cases and that their device’s features target specific verticals and applications,” concludes Harbison. “For instance, Google and Levi’s new Commuter Trucker Jacket is one of the most exciting new products within this market, but even that is targeted at a very specific niche market: the urban bike commuter. Vendors should focus on continuing to create targeted consumer-centric applications while also developing enterprise applications to give this market wider appeal.”