At 1000+ qubits, the D-Wave 2X quantum processor evaluates all 21000 possible solutions simultaneously as it converges on optimal or near optimal solutions, more possibilities than there are particles in the observable universe. No conventional computer of any kind could represent this many possibilities simultaneously, further illustrating the powerful nature of quantum computation.

The D-Wave 2X demonstrates a factor of up to 15x gains over highly specialized classical solvers in nearly all classes of problems examined. Measuring only the native computation time of the D-Wave 2X quantum processor shows performance advantages of up to 600x over these same solvers.

“The D-Wave 2X marks the latest step forward in our aggressive performance trajectory,” says Jeremy Hilton, vice-president of processor development at D-Wave. “Our first system, the D-Wave One system, was the first scalable quantum computer, but was slower than general-purpose optimization software. The next generation D-Wave Two system significantly outperformed the general-purpose optimization software, but was only comparable to specialized highly tuned heuristic algorithms. With the D-Wave 2X system we have surpassed the performance of these specialized algorithms, providing incentive for users to develop methods to harness this revolutionary technology for their own applications.”

To showcase the performance of the new system, a paper outlining benchmark results for a set of problems native to the D-Wave 2X system will be posted to the arXiv. A summary of the results and a link to the paper are on the company’s blog.

“D-Wave continues to advance the state-of-the-art of quantum computing at a rapid pace, with a number of impressive application results, and the release of their 1000 qubit D-Wave 2X system is another major milestone in the industry,” said Earl Joseph, IDC program vice president for HPC. “Complementing today’s high performance computing systems, quantum computers will likely become an important tool to solve important problems that can’t be solved today.”

In addition to scaling beyond 1000 qubits, the new system incorporates other major technological and scientific advancements. These include an operating temperature below 15 millikelvin, near absolute zero and 180 times colder than interstellar space. With over 128,000 Josephson tunnel junctions, the new processors are believed to be the most complex superconductor integrated circuits ever successfully used in production systems. Increased control circuitry precision and a 50% reduction in noise also contribute to faster performance and enhanced reliability. 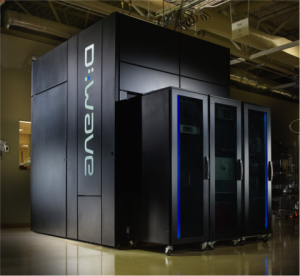