Despite its shortened run due to a tropical cyclone in parts of Asia this month, the 37th HKTDC Hong Kong Electronics Fair (Autumn Edition) and the 21st electronicAsia managed to attract a total of around 86,000 buyers from 139 countries and regions in three days. 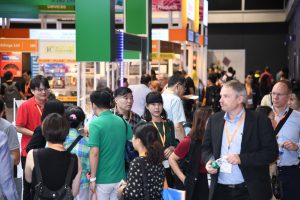 “The fair period was cut short to three days due to weather conditions and some buyers’ travel plans might have been affected. In spite of this, we have taken various measures to attract more buyers to visit the fairs on the last day and facilitate the business connections between exhibitors and buyers,” says Benjamin Chau, HKTDC deputy executive director. “Through the on-site survey, we found that the electronics industry is positive towards the sector’s outlook. Buyers are grasping the last chance to source products on the final day.”

During the fair period, the HKTDC commissioned an independent survey, interviewing a total of 1,025 exhibitors and buyers about the outlook for the electronics market and new product trends. More than half (54%) of the respondents expect the overall sales of their companies will increase next year, up 6 percentage points from the survey in 2016. For major markets, respondents are most optimistic about ASEAN (92%), followed by the Chinese Mainland (91%), Latin America (85%) and Taiwan (85%).

With the Internet of Things (IoT) becoming more popular, the survey reveals that 84 per cent of respondents think audio visual items will be the product category most benefitted from the smart home trend, followed by wireless charging devices (81%) and systems items for connection with the Internet/mobile network (77%). The industry also believes that consumers are willing to pay a premium of 18% for products with smart home capabilities compared to traditional products. 81 per cent of respondents are optimistic about the virtual reality and augmented reality devices market in the next two years. For related products, they are most optimistic about audio visual items for entertainment purpose (56%), followed by mobile/on-line games (55%).

The Startup zone at the Autumn Electronics Fair this year attracted close to 100 start-ups from seven countries and regions, doubling last year’s number. The Zone provides a one-stop promotional platform for start-ups to meet with potential suppliers, buyers and investors. The start-up supporting institution Gadget Excelerator Lab (Gelab) led 12 start-ups to the Autumn Electronics Fair this year. Francois Lee, CEO of Gelab, said that the HKTDC had proactively promoted the Startup zone through different media platforms. “We are happy to see that many buyers from Southeast Asia and the Middle East have made enquiries, and some of them consider placing small orders to test local markets.”

The fair featured a wide range of state-of-the-art electronics products to suit buyers’ needs. Besides the Startup zone, the Tech Hall also featured the Virtual Reality (VR), Robotics & Unmanned Tech, Smart Tech and 3D Printing zones to showcase popular high-tech products. Jafar Sherif, a buyer from the United Arab Emirates, said as a lot of residential and commercial projects are under construction due to the Expo 2020 in Dubai, IoT and smart products will enjoy strong demand. This is his first visit to the Autumn Electronics Fair. He had found 30-40 potential suppliers of IoT solutions, AV systems and smart devices from Hong Kong and the Chinese mainland.