High-frequency solutions are becoming leading contenders for new use cases

About three years ago, a major inflection point happened in the wireless power industry. Apple – which has a dominant market share of smartphones in the US and other countries – announced that its phones would charge wirelessly using the Wireless Power Consortium’s Qi Standard. This was a big moment for the industry, as it brought together all the major players on a single standard, offering the benefits of interoperability and safety on a global scale.

Qi’s low-frequency, inductive charging method prevailed over a high-frequency, inductive resonant method promoted by the AirFuel Alliance (which merged the Power Matters Alliance (PMA) with the Alliance for Wireless Power (A4WP)). With this development, billions of Qi-certified phones and chargers have since been sold, making Qi the global household name in wireless charging.

But Qi-based charging has limitations — most notably, power levels, freedom of placement and a constrained design limitation of the outer dimensions of the wireless power antenna (~25mm diameter). Because of these limitations, product developers who value the benefits of wireless charging are revisiting high-frequency solutions promoted by the NFC Forum and AirFuel Alliance.

NFC is the newest entrant into the wireless power standards game, and its potential is massive. With an installed base of billions of devices, NFC traditionally has been used as a communications platform, but earlier this year its standards body – the NFC Forum – turned on a small amount of power transfer (~0.5 watts received) as part of the protocol.

This innovation opens up opportunities for wireless charging in a variety of small, space-constrained devices like smartwatches, fitness bands, smartglasses, and styluses. Some of the initial products rolling out with this method of wireless power transfer include Samsung’s Galaxy Fit and Huawei X Gentle Monster Smartglasses.

But for this technology to really take off, the amount of power received needs to increase, while keeping NFC’s data transfer rates in the 106 – 848 kb/s range.

NuCurrent – a US-based wireless charging technology developer with over 125 patents – has created a proprietary NFC extension that enables up to 3 watts of power received while driving data transfer rates at 106 kb/s and up. The chart below shows the power/data ranges that are available using NuCurrent’s extension. 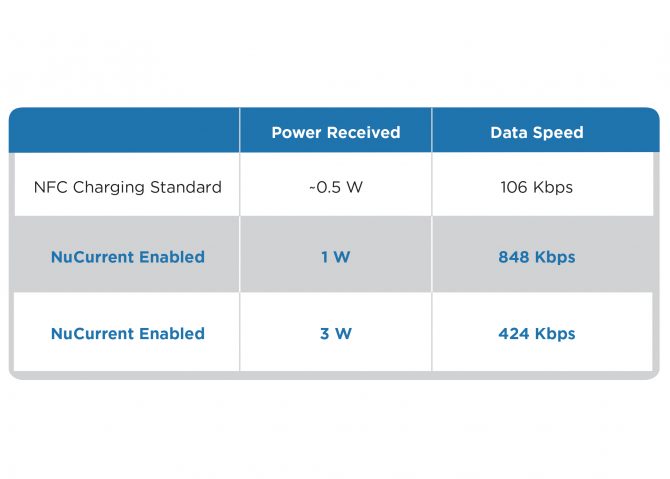 Moving forward, NuCurrent sees applications of this proprietary extension being applied by a broad range of manufacturers across many product categories, providing a premium wireless charging experience for their users. Soon, as shown in the illustration below, you’ll see complete wireless charging of hearable devices (either in cases or directly placed on top of the NFC antenna of the phone), which means you’ll have on-the-go charging for small wearable devices with these NFC charging capabilities on-board. 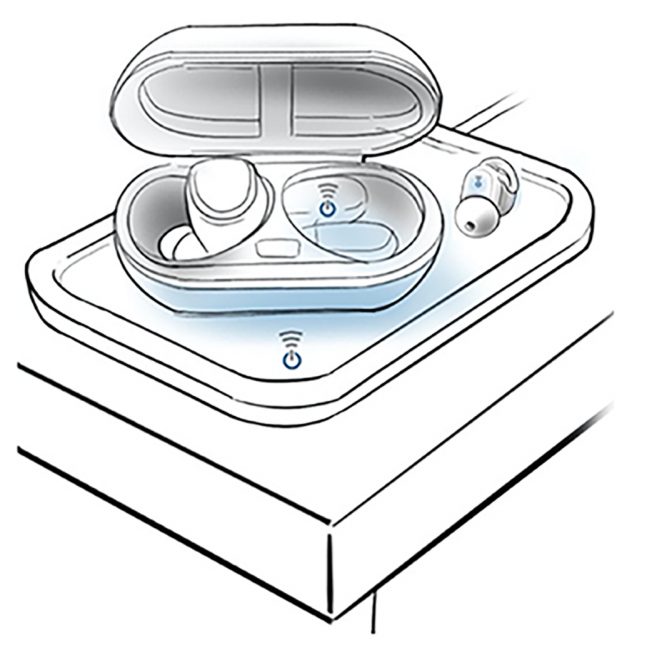 AirFuel – which promotes an inductive resonant charging technology that operates at 6.78Mhz – may have lost to Qi as the de facto phone charging standard, but this method of charging has many powerful attributes. These include a greater separation between transmitter and receiver, a one-to-many relationship between transmitter and receiver, higher power potential, and greater spatial freedom. 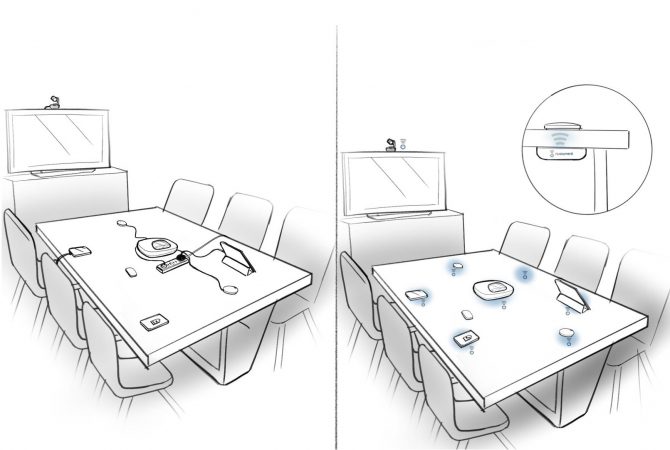 With all these advantages, it’s easy to wonder why this method didn’t take off. The answer is pretty straightforward. It comes down to cost of components, balancing system dynamics, and mastering electromagnetic interference (EMI).

Using the principles in the AirFuel standard, NuCurrent has once again developed a proprietary extension that clears those two hurdles to the commercialization of the technology. One remarkable example is the development of a platform that features a series of modular tiles that form an extended-range surface for wireless charging – perfect for workspaces and other areas with multiple devices of different types.

By addressing the limitations of cost, system dynamics, and EMI, NuCurrent is poised to help manufacturers deliver the benefits of inductive resonant charging to their customers.

SideBar: How is Qi advancing?

Almost immediately following Apple’s decision to adopt the Qi standard, Apple and Samsung began promoting proprietary extensions to Qi that allowed for faster charging of their phones. Apple’s fast charging bumped the speeds from 5 watts to 7.5 watts and Samsung’s extension took charging from 5 watts to 8 watts. These proprietary extensions were developed to provide a better user experience for their specific devices pushing wireless charging closer to their wired charging counterparts.

Earlier this month, Apple announced the re-launch of its proprietary MagSafe platform which includes wireless charging up to 15 watts, but only with the iPhone 12 and at a different operating frequency than Qi.

Apple’s announcement follows the development of other proprietary charging extensions by major players in the industry including Huawei and Samsung. The chart below provides an overview of these examples of proprietary extensions. 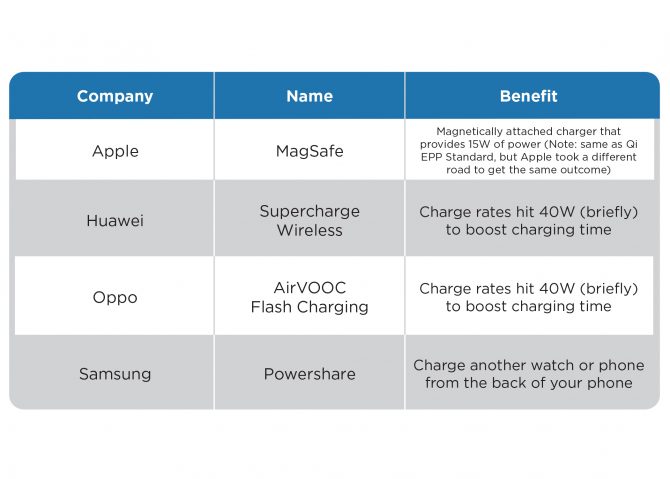 Proprietary extensions of wireless charging (in this case, Qi) create opportunities for greater functionality within a product ecosystem. Through these announcements, phone manufacturers appear to be saying “your phone will work on Qi, but it will work best using our proprietary extension,” so this is very much a space to keep monitoring.

But Qi (and proprietary extensions of it) aren’t limited to smartphones. One example outside of mobile phones is Honeywell’s CN80/85 computing platform which features a wireless charging solution developed by NuCurrent. By developing an extension off of the Qi standard, NuCurrent was able to deliver 10 watts of charging over a 10mm gap with an authentication scheme and voltage regulation to support use in multiple vehicle types.

As you can see, the wireless charging world continues to evolve, and the interplay between established standards and innovative extensions of them will continue to be an important and interesting development.

This article was written and submitted by NuCurrent Inc., a Chicago-based firm that specializes in wireless charging technology for all products.