Why it’s a smarter strategy than you think – even now

China is the “world’s factory,” a global manufacturing hub that produces the vast majority of electronics components used around the world. Those components power everything from smartwatches to cars to appliances, as well as critical medical equipment such as ventilators, ultrasound machines, hospital beds, and more. But with incredibly high tariffs imposed by the US on many of those goods – including medical equipment – is it worth it for manufacturers to stick with their operations in China?

The industry has been divided on that. You’ve probably seen your fair share of stories about major OEMs moving some of their manufacturing operations to other countries. This past spring, as production lines shut down due to COVID, it’s no surprise people were contemplating the benefits of decreasing their reliance on China.

However, does avoiding those tariffs warrant the huge effort it takes to relocate operations? After a long year and many tough decisions, the overwhelming answer has been…no. For most manufacturers, the advantages outweigh the 25% tariffs. 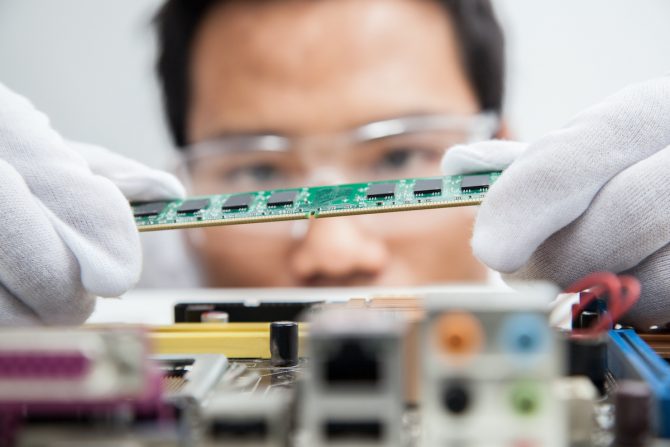 So what are the advantages of manufacturing medical equipment in China?

With change comes risk: that’s a fact of life. Switching manufacturing partners, even within a region, has significant challenges. Relocating to a whole new country is even more time-consuming, expensive and risky, with a steep learning curve that involves extensive travel, multiple factory tours, work sessions, and more. And it’s a level of risk many aren’t willing to embrace.

According to Forbes, “Manufacturers are sticking with partners they know and trust, despite the tariffs. With restricted travel, de-risking new partners has been incredibly difficult, so most have opted to work with teams they know.”

In addition, China lived through COVID-19 for months before it impacted the rest of the world: that experience has enabled them to be at the forefront of developing strict virus controls. With those controls, the types of shutdowns that happened in the first months of 2020 are highly unlikely, and medical equipment companies will be able to count on continuity and supply chain dependability moving forward.

China has the biggest labour force in the world, topping out at 783 million workers. Unlike countries with comparable populations, like India, they have been a manufacturing hub for 20 plus years, and have the depth and breadth of specialized skills required to build the premium-quality electronics needed for medical equipment.

Yes, labour costs in China have been creeping up since minimum wages were instituted in 1995, with jumps related to wage increases in 2010 and 2019 – and they are higher than countries like India or Vietnam. But they are still dramatically lower than in western countries. For example, in Guangdong, a key manufacturing region in China, minimum wage is approximately $2.15 an hour.

Keep in mind that with those marginally higher wages come skills and experience you won’t find in other regions, with greater speed and much more efficient lead times than other countries can provide.

Advantage #4: Quality of logistics and infrastructure

Companies can benefit significantly from China’s established manufacturing history. They have robust infrastructure in place to move everything from raw materials to finished products quickly and efficiently through the country and across international borders. 40% of China’s roads are national highways, and they have 2/3 of the world’s high-speed rail lines, spanning 290,000 km, with trains that can travel up to 250 km an hour. Add modern cities, world-class airports and marine ports to the mix, and you have a setup no other country can come close to.

According to Wharton Magazine, “China has arguably the best physical infrastructure outside the western world.”

The scale of the manufacturing China does for their own medical market is enormous, representing close to $100 billion in health care spending. Which means western companies have access to a market focused on quality and innovation – one they can leverage for their own production and expansion. This also means they can draw on the country’s robust manufacturing supply chain, including top-quality, cost-effective raw materials that can be used for local production.

China has more FDA-registered medical manufacturing facilities (Class II and Class III) than any other country apart from the US. That may be why a number of large medical manufacturers,  including Roche and Johnson & Johnson (with Bayer and Novartis announcing upcoming plans), have moved not just production facilities to China, but also R&D operations.

The “Made in China” initiative is also increasing manufacturer confidence in the quality of Chinese goods. President Xi Jinping has committed to making the words “Made in China” synonymous not with cheap, low-quality goods, but with top-quality manufacturing, especially for complex products like medical electronics.

The big disadvantage: 25% tariffs have a huge impact on profitability

Thanks to trade wars between the US and China, tariffs have escalated to punitive levels. And not only do they include finished goods, but also metal alloys (including steel and aluminum) used in many medical devices. From this perspective, there’s no arguing that manufacturing in countries that haven’t had this tariff imposed on them is the cheaper option.

Not all medical items are subject to the tariff, however. There are a few exceptions, which include microwave ablation antennas, tube suspensions used to position X-ray equipment, and food allergen analyzers. Plus, medical device manufacturers can apply for individual exemptions, but that may not be easy: several big medtech firms have had their applications rejected.

As a workaround, some manufacturers have been routing Chinese-made goods through other countries, like Vietnam, adding “Made in Vietnam” labels to avoid the tariffs. We don’t recommend this tactic: both the US and Vietnam frown upon fraudulent labeling, and any companies found doing this are likely to face heavy fines.

Negotiations with the US Government over tariffs continue, and there is hope that with the incoming administration, the issue will be addressed in a way that’s favourable to the industry. However, the outcome of the new Presidency remains to be seen: political analysts predict that Biden is likely to be a little softer with China than Trump has been. But despite some initially promising statements, there’s little indication he will lift the current tariffs.

Ultimately, the talk we’ve been hearing about restructuring supply chains has ended up being mostly that: talk. Despite punitive tariffs and COVID complications, manufacturers have overwhelmingly chosen to stay put. They’re sticking with trusted partners, a skilled workforce, sophisticated manufacturing capabilities, and low labour costs, which for most, outweigh the tariffs.

Not sure if manufacturing your medical equipment in China is the right choice for your company?

If you’re thinking about moving your operations out of China, talk to us about factors to consider. We can help you weigh the pros and cons to see what works best for your operation.