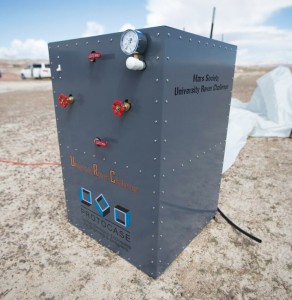 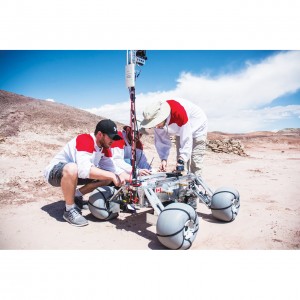 Four Canadian student robotics teams completed an impressive showing among the world’s most elite university robotics teams at the 2015 University Rover Challenge, held this past spring at the Mars Desert Research Station in southern Utah. Twenty-three student teams from around the world designed and built a Mars Rover to complete four grueling challenges that simulated tasks that would be performed during Mars exploration.

This marks the eighth year for the University Rover Challenge, which started in 2007 as an extension to the work done by student organizations participating in mission simulations at the Mars Desert Research Station. Starting with four teams in its inaugural year, it has since become the world’s premier engineering competition for university students, with a record 44 teams participating this year (before being reduced to the final 23 for competition weekend).

“Our primary goal is to challenge talented students with ambitious, out-of-this-world problems that go beyond the classroom environment,” says Kevin Sloan, University Rover Challenge director. “This lets them develop in complex project settings, and also showcase the output of their work.”

Protocase, a leading Canadian-based custom manufacturer of electronic enclosures, parts and components, was a major sponsor of this year’s event. The company’s contribution included a $2,000 credit to each of the student teams towards manufacturing custom parts for their Mars Rover (along with a 50% discount for any manufacturing that exceeded the initial credit).

Teams from Canada, the United States and Poland took advantage of Protocase’s sponsorship, working with the company’s account managers and technical team to precision-fabricate parts for their rover, including chassis covers, suspension parts, robotic arms and camera gimbals, to name a few.

“Partnering with the University Rover Challenge was a real natural match for us,” says Doug Milburn, Protocase co-founder and vice-president of sales and marketing. “The process we went through with the student teams was exactly the same as what how we work with our customers, who are also in science, engineering and innovation. We thought this was a great opportunity to expose this upper cut of university students, who are going to be the drivers of science, engineering and space exploration in the future, to the most advanced design and manufacturing methods available today.”

Over the span of the competition weekend, student teams got to showcase their technical abilities and innovative thinking, which all came together as their rovers attempted to complete tasks in the competition. For example, the University of Saskatchewan Space Design Team (USST) got an edge by mechanically attaching an Oculus Rift binocular vision camera to their rover, and linking it to their control centre. This provided the team with depth perception, allowing them to maneuver over obstacles, as well as grasp objects with their manipulator arm. (All other teams were limited to 2D vision without depth perception, which is less than ideal, as anyone who parks their car with a backup camera well understands). The internal systems on the rover were mounted inside a custom-made chassis from Protocase to keep out dust from the often gusty desert wind.

“With more than 140 teams having competed over 9 years, the body of lessons learned has been rather extensive,” Sloan says. “These lessons will go a long way towards designing the ‘flight-ready’ systems that would support future astronauts on Mars.”