The connection is there. How will you exploit it?

This article looks at the future of manufacturing and automation and discusses ways in which forward-thinking companies now have the capability to far more effectively leverage their manufacturing data, thanks to recent advances in hardware and networks. 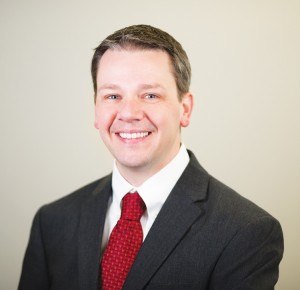 The manufacturing industry is in a constant state of flux from a technological standpoint, primarily due to the continual evolution of hardware and software platforms in the industry suppliers’ inexorable drives towards even faster, more accurate and more cost effective automation, process, safety and motion solutions.
Even with continual developments, it is fair to say that we have seen a number of historical stage gates, some of which have been defined as Industrial Revolutions. In the first instance mass mechanization took industry and agriculture by storm. Henry Ford then popularized the concept of production lines. Numerical control and eventually computer numerical control were the next big breakthroughs followed by a revolution defined by fieldbus networks and interconnectivity.
We are still firmly in the grip of this final revolution, but if the industry futurologists are to be believed – and we have no reason to doubt them based on the technology we are seeing – we are very near to the final curtain, as the concepts of the Connected Industry and Industry 4.0 coupled with the wonderfully named Internet of Things (IoT) are about to take us and the industry well and truly in to the information age.

Information has always been available within manufacturing

Information has always been available within manufacturing, with the first basic networks sharing and delivering operating parameters between devices and processes, but it remained a closed shop either due to the closed nature of the network and hardware or the bespoke format of the information being delivered. When the first PLCs arrived on the scene, most of them exhibited their own supplier-specific architectures and foibles, meaning that multi-supplier automation and motion solutions were not all that common.
However, with pressure from customers – especially the big multinationals, fed up with having to specialize on one particular architecture and language – the market began to open up. We have since seen products, protocols, programming and communication approaches that are becoming platform and supplier agnostic, giving end users the ability to choose from a much wider range of suppliers without potentially fettering the performance of their products.
Interestingly, it is a 35 years old technology that is leading the way for this new industrial revolution. Commercially introduced in 1980 and first standardized in 1983, Ethernet and its various and growing range of industrial variants, is slowly becoming the protocol of choice for manufacturing solutions. The protocol has undergone a number of advances in terms of bandwidth and transmission distance, coupled with increases in bit rates from the original three Mbit/s to the current 100 Gbit/s – with 400 Gbit/s expected by early 2017. These transmission improvements have not only opened up the technology to ever more advanced automation applications, but also to associated and co-located motion and safety infrastructures, which are far more demanding in terms of transmission priorities and feedback speeds.
The beauty of the widespread deployment of Ethernet and its variants within the manufacturing space – thanks to technology from companies such as Schneider Electric, Omron, Siemens and Eaton – is that Ethernet is also the de-facto standard for the office environment and it is the potential of the direct links between the shop floor and the boardroom that have got so many people so excited. Coupled to the Internet of Things (IoT) it is easy to see why.

IoT is a network of devices, each of which is uniquely identifiable

The Internet of Things in its most basic guise is a network of devices, each of which is uniquely identifiable. 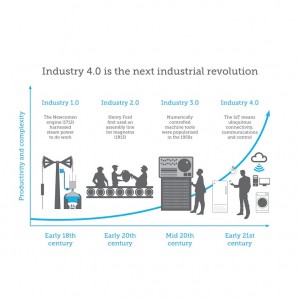 In your home, using your Internet router as a hub, this is already apparent, but outside of your router and your own home network’s IP allocation, this identification becomes lost. The IoT will involve every connected device having some form of electronics that defines its own unique (globally) identification, meaning that devices can be accessed from any computer in any location simply by using these unique identifiers.
Security and tin foil hats aside, this is actually a remarkable breakthrough for industry and is driving the concept of Industry 4.0 – defined as the fourth industrial revolution and leveraging manufacturing networks. It is already in place in an early guise, thanks to the use of Ethernet-based networks and managed remote access/monitoring solutions. Suppliers, machine builders and operators (with the proper protocols and privileges) are already able to interrogate devices, but the IoT approach will make this even easier and more widespread and, due to the means of access, potentially even more secure.

Data is now the new king of manufacturing

The ability to drill down to the smallest and simplest product or component has also defined the most powerful current tool in the manager’s and CEO’s arsenal – data! Data is now the new king of manufacturing and the sheer volume available on tap is staggering. If you imagine a single cell within a multi-cell manufacturing plant, then consider the number of discrete components and data nodes within that cell you soon get an idea of what can be extracted. Now imagine the cell runs at hundreds of cycles per minute and the data volume figures really begin to stack up. Not every component has to be Ethernet enabled, but as long as it is feeding data of some description into something that is, be it a switch or a PLC, then this data becomes accessible.
It is in the intelligent collection, management, collation and disbursement of this data where the real gains can be made and many leading suppliers are already developing systems that give manufacturers never before seen insights into their manufacturing operations – where historical performance figures can be defined down to an individual node or component. Gone are the days of generating historical trending by sitting with a clipboard or Excel spreadsheet and stopwatch next to a machine’s output; this information is now available at the push of a button. What’s more, it can be presented in a format that suits the ultimate end user – cost vs. speed vs. yield vs. power consumption vs. breakdowns vs. reject rates – the possibilities and comparisons are endless. All the data is there, it is up to the user what to do with it.

The sheer proliferation of Ethernet-capable products – with over 1,200 available from Allied Electronics alone – is a testament to how important data-driven manufacturing operations are becoming. By leveraging this data, industry professionals can make quicker, more-up-to-date operational decision that will have a direct result in real time, as opposed to making an educated guess and seeing what happens over the course of a day. And, as data is normally a two-way street, another potential outcome is the ability for consumers to tailor product features by having some form of direct input to the production line. This type of customization would normally only be possible in small scale or batch production runs, but with these communication possibilities, mass customization can now live happily side by side with mass production. It won’t stop here. For once technology is not the limiting factor, it is now up to the imagination of those who can best envisage the advantages of a connected industry.