For the full potential of 5G, 5G+, and mmWave technologies involved in cellular networks to be achieved, immense testing of how user equipment (UE) and base stations interact in lab simulations and real-life environments is necessary– in so-called 5G testbeds. Low power consumption, massive equipment connectivity, ultra-low latency, secure communications, cloud and edge computing services, and the deployment of technologies making all this possible, are key challenges being addressed in ongoing research on 5G networks. Software-defined radio (SDR) is a complementary technology that allows for testing many of the technologies involved in 5G networks.

What research are 5G testbeds used for?

The number of UE devices will skyrocket with emerging wireless technologies connected to 5G networks that provide internet of things (IoT) services for everything imaginable. In order for this to occur, 5G will play a central role, with support for Ultra-Reliable Low Latency Communications (URLLC), massive Machine-Type Communications (mMTC), Device-to-Device (D2D), and Machine-to-Machine (M2M) communication. These mmWave networks are expected to play a central part in a variety of IoT related services such as Intelligent Transport Systems (ITS), smart city applications, smart home tech, smart automation for Industry 4.0, and the enactment of mission-critical IoT initiatives. 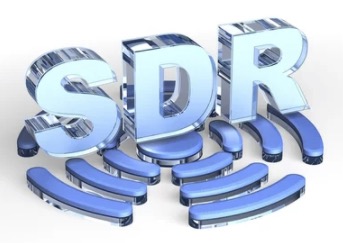 With an increase in technologies requiring 5G networks will come an increase in the types of base stations (i.e. network cells), access points, and other types of interconnectivity that provide coverage for UE. The latest types of 5G connectivity include device-to-device (D2D) communication that enables direct communication between devices without going through traditional base stations central to macrocells (MCs). This helps to offload traffic from MC base stations to small cell and/or femtocell base stations, as well as to other UE, all while increasing network cell coverage via multihop mesh network transmission. 5G networks will be much more software-driven to support the huge amount of UE using multihop mesh networks. This includes software-defined networking (SDN) architectures and multi-access edge computing (MEC) in the control plane to achieve dynamic network management, for tasks such as packet forward during D2D communication, and thereby enabling enhanced Mobile Broadband (eMBB). 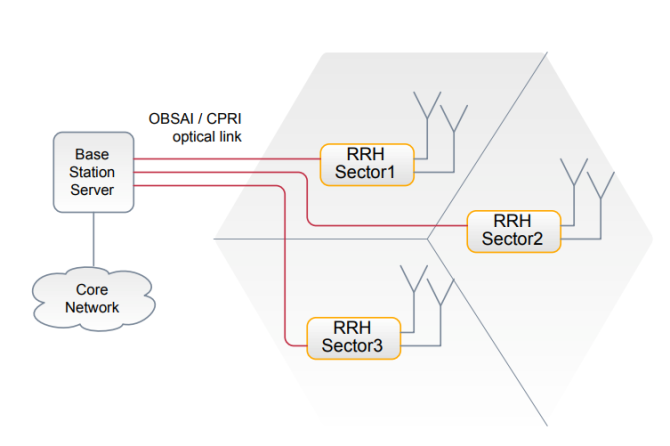 All of these new base stations, IoT devices, and other UE, as well as radio communications between them all, will have their own set of protocols operating at various frequencies, and thus require extensive testing. Moreover, challenges arise due to mmWave/5G (24–54 GHz) electromagnetic waves suffering from extensive propagation loss between transmitter and receiver.

What is a software-defined radio (SDR)?

SDRs contain a radio front end (RFE) and digital back-end. A SDRs radio front-end contains the receive (Rx) and transmit (Tx) functions to receive signals over a very wide tuning range, even extending into the mmWave range. SDRs contain multiple independent Tx and Rx channels, which support MIMO operations, all with dedicated DACs/ADCs. The highest-bandwidth SDRs have 3GHz of instantaneous bandwidth, which is especially important for the immense amount of data required to be sent and received quickly over 5G networks. SDRs have a very high throughput digital backhaul, using 100GBASE-R Ethernet links, that is required for processing data and serving vast amounts of UE at very low latency. 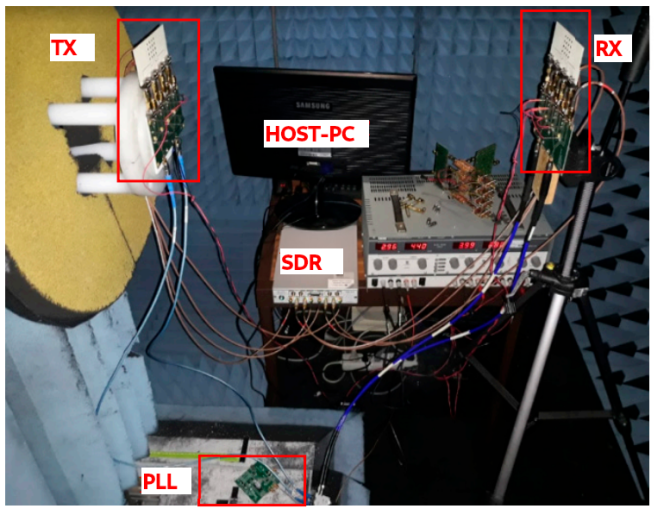 A SDRs digital back-end contains a field-programmable gate array (FPGA) with on-board DSP capabilities for modulation, demodulation, upconverting, downconverting, as well as providing additional logic blocks for custom development. Such logic gates are configurable and upgradeable, and provide capabilities for updating to the latest radio protocols, DSP algorithms, and various other computational needs.

What does SDR bring to 5G testbeds? 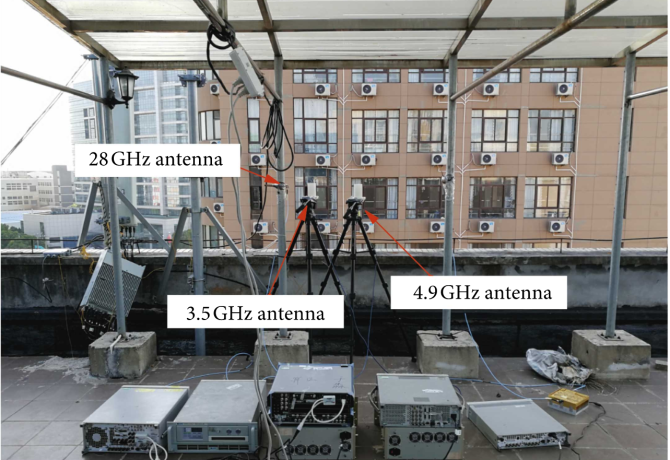 SDR-based remote radio read (RRH) are found in base stations, and are essentially RF Tx and Rx radio chains which connect to a baseband unit, allowing for a physical interface connection to the core network’s using for instance, the enhanced common public radio initiative (eCPRI).

SDRs compatible with open source software suites enable researchers to deploy and experiment with end-to-end 5G networks, even though they may not have access to carrier-grade hardware deployed by the major telecom operators. Such SDRs can be deployed in testbeds, for instance in testbed base stations deployed in dense urban areas, an area of research which will be discussed in the last section.

An important requirement for networks and UE is T&M of antennas and signal propagation. Over-the-air (OTA) testing of 5G signal transmissions is of great importance due to 5G/mmWaves having unfavorable propagation characteristics. Important tasks include measuring antenna performance, testing beamforming algorithms, and ensuring devices meet standards, for starters. In the lab, anechoic chambers can be configured for multiple purposes including antenna pattern measurements (near field), and specialized propagation measurements. For instance, channel sounding measures parameters such as signal path loss, delay, absorption & reflection off surfaces, multipath fading, angle of arrival (AoA), direction of arrival (DoA) and Doppler shifting; all parameters which affect the performance of the radio communications of a 5G network. 5G channel sounding measures channel performance dynamically on channels operating in the mmWave spectrum, using bandwidths upwards of 500 MHz, over MIMO transmissions which require extensive DSP for beamforming and beam steering.

Many research studies have been conducted in the area of radio channel propagation in various indoor environments such as in offices, dining rooms in homes, stairwells, to name a few,  as well as in a laboratory at 28 GHz (a prominent band for 5G wireless networks). Indoor environments provide rich sources of scattering objects for radio channel propagation studies ranging from people and objects in the building to the building itself. 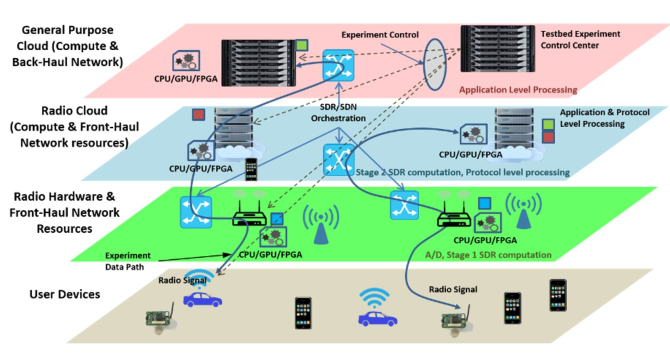 Structural design including construction materials, building size, and the interaction with various other aspects of systems,  force EM waves to propagate across multiple paths through reflection, refraction, and diffraction phenomena. Measurements of power delay profiles are particularly important for these multipath signals. Other studies include measuring the effect of outdoor to indoor propagation of 5G signals; an obviously important task for any base station antenna.

COSMOS is a multi-layered computing system, with an RF plane that can flexibly divide signal processing and network function virtualization (NFV) on a SDN between a local SDR, using various FPGA functionality, and a remote cloud RAN (CRAN) with massive CPU/GPU and FPGA capabilities.

As discussed here, testbeds will be central to 5G network and UE development. High performance SDRs are playing a significant role in this development, not only for their RF capabilities but also their FPGA resources. By using SDRs, researchers are capable of testing antenna, signal propagation, signal processing, various technologies allowing massive interconnectivity, and provide a means to connect between the 5G core network (mobile backhaul) and radio fronthaul. As the 5G revolution is just underway, SDRs are expected to play a large role in these networks and devices.

Brendon McHugh is a field application engineer at Per Vices Corp. The Toronto-based firm is a leading RF and digital systems innovator and integrator supplying multiple industries with software defined radios for wireless communications.