Oppo Find X on the rise

ABI Research has been tearing down devices since 2011 and for the most part, we find that smartphones are all beginning to resemble each other. 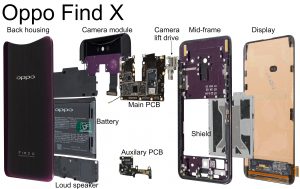 While it is getting difficult to differentiate product features, there are still a few unique features that most manufacturers are striving for.  Edge-to-Edge display is one of them.  However, there are several factors complicating the production of a true edge-to-edge display product such as the front camera, home button, fingerprint ID, and earpiece.

The earpiece is still on the top front of the Find X, but it is just a small sliver of a hole at the top of the device (hardly noticeable as it blends in well with the very slim bezel).  It’s obvious that the front camera was where Oppo spent its real engineering time on the Find X. 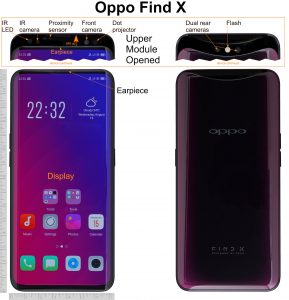 The front camera, rear camera, and front facial recognition are all within a camera module, which is the full width of the phone, and rises out of the phone about 1cm when needed (unlocking the phone with facial recognition or the use of the front or rear cameras).  The module retracts when not in use.  Here is a look at the major electrical components that make up the Oppo Find X.

The RF front end of the Oppo Find X is comprised of all the major RF players:  Qorvo handling most of the RF switching (including Antenna tuning), Skyworks with 2G and multi-mode power amplifiers (PAs), Avago with one PA, and Qualcomm with LNA banks and an envelope tracking power supply.  Qualcomm also provides the core chipset which includes the SDR845 transceiver.

As mentioned above, the core chipset is from Qualcomm.  The main component of the chipset is the 10nm SDM845 modem/application processor The SDM845 chip includes an X20 LTE modem (1.2Gbps downlink/150Mbps uplink), an octa-core CPU from Qualcomm (Kryo 385 cores), Spectra 280 ISP, Adreno 630 visual processor, Aqstic audio, WiFi baseband, and a secure processing unit.  Samsung provides both the 8GB DRAM and the 128GB Flash memory.

The Oppo Find X is loaded with camera pixels.  There are two rear cameras:  16Mp and 20Mp with Optical image stabilization (OIS) and a 25Mp front camera.  There is also an IR camera in the front that works with the dot projector for facial recognition.  Other sensors include two Knowles mems microphones, AKM compass, Bosch accelerometer/gyro, and two MagnaChip hall sensors for detecting the camera module movement.

The power management within the Oppo Find X is made up of 4 chips that are part of Qualcomm’s platform (PM845 PMU, WCD9341 audio codec, PMI8998 interface, and PM8005 transceiver power management).  The platform chips are further supported by miscellaneous regulators, amplifiers, and drivers from TI, Richtek, Fairchild, ON Semi, and Maxim.

These findings are from ABI Research’s Teardowns (https://teardowniq.com/), which include high-resolution photos and x-rays, pinpoint power measurements, detailed parts lists, and block diagrams.