Each negative event has contributed to the current market volatility

COVID-19 has sent traumatic ripples through supply chains around the globe, but the semiconductor supply chain was fragile long before governments shut down and catastrophe struck. In a culmination of negative variables, the chip shortage has amassed over the years from a series of unfortunate events.

Events include trade wars between countries that impact commodity pricing and distribution, natural disasters like a drought in Taiwan and winter storm in Texas that damaged major factories, and incidents like the three separate plant fires in Japan between 2019 and 2021 that have been devastating to operation and contributed to raw material shortages as well. The woes that chipmakers experience appear endless even among plans for major companies to expand to meet demand as countries vie to be crowned lead global chipmaker. Each phenomenon has contributed to the current market volatility and will continue to impact the outlook for companies as chipmakers expect the shortages to continue in the years to come. 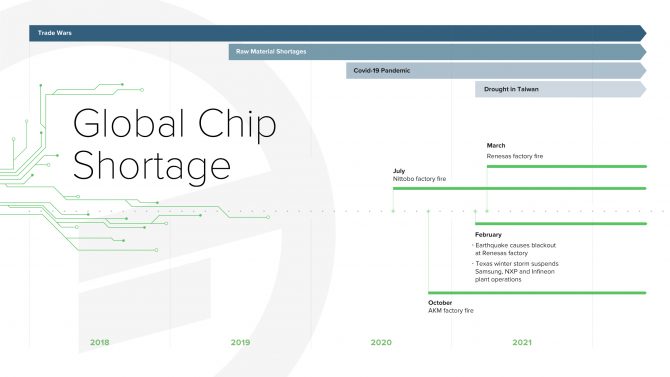 The US – China trade war and the Japan – Korea trade war led to market turbulence for chipmakers and added to rising concern over the effects geopolitical conflicts had on manufacturing and distribution. Both trade wars caused increased lead times, raised pricing and contributed to constraints on raw materials.

In 2018, the US – China trade war began and unfolded in five phases between 2018 and 2021. “The trade war took direct aim at Beijing’s ambitions to become a leader in advanced manufacturing technologies such as semiconductors and electric vehicles,” reported The Wall Street Journal. The first wave of tariffs that had direct impact on chipmaking hit Chinese imports in 2018 and targeted raw materials for chips, such as silicon and reactor tubes and holders designed for semiconductor wafer production.

In a ripple effect, the tariffs that hit these raw materials were one of three main factors that led to the 8-inch (20mm) wafer shortage reported in Q3 2019, which persists today; the other factors were increased end-product demand and uneven supply of foundry equipment. The tension between the US and China further caused wafer supply hoarding when the US later blacklisted China’s biggest chipmaker SMIC in 2020. With many vital parts of the supply chain impacted, US industries reliant on semiconductors feared restrictions on Chinese imports would lead China to create their own semiconductor ecosystem, even if they’d have to play catchup with US chip designs.

In August 2019, the trade war escalated as Beijing announced they would apply $75 billion in tariffs on US goods. The last phase of US tariffs in September 2019 was aimed to hit $120 billion worth of Chinese goods. An agreement between the US and China was made in 2019 that included structural reforms and changes to China’s economic and trade regime. The hope was that when this agreement later went into effect, it would reduce the back-and-forth tariff increases on imports.

The Japan – Korea trade war that began in 2019 commenced with Japan implementing export restrictions on raw materials used to make chips. Major semiconductor manufacturers SK Hynix and Samsung, both headquartered in South Korea, were caught in the crosshairs trying to secure inventory to buffer production against disruption. The major chipmakers in South Korea were heavily dependent on chemicals produced by Japan vital in chipmaking. The already lingering concern of the semiconductor supply chain from tensions between the US and China heightened as a result of this additional disruption in production of chips coming out of Asia.

2020 – No Reprieve in Sight in Wake of Escalated Shortages

In 2020, COVID-19 struck. Manufacturers in all industries scrambled to meet supply and demand in an unprecedented economic climate. For chipmakers, production for almost half of the year was halted due to government shutdowns and COVID-19 restrictions. By the time production did resume, semiconductor companies had to adjust to increased pressure in various sectors.

The automotive industry especially saw a rise in demand as purchasing behavior shifted in the second half of the year when consumers avoided public transportation due to the pandemic and developed an increased desire for customization in vehicles. Recovery for automakers was hindered as the supply chain experienced shortages in 8-inch wafers and ABF substrates necessary for semiconductors manufactured in cars. In response, automakers like Volkswagen, Ford and Toyota cut production at a time when the industry was on the precipice of a boom.

Deterioration in raw materials continued to intensify because of capacity restraints, unpredictability of the COVID-19 pandemic and the unforeseen events that struck chipmakers globally. The 8-inch wafer shortage snowballed from 2019 due to higher demand in the IC market, increased tension between the US and China and growth in 5G and automotive industries– which led wafer production capacity to reach 99% in 2020.

An ABF shortage was exacerbated after a fire impacted production from Japanese manufacturer Nittobo in July 2020. ABF suppliers tried to increase production for the months ahead, but with high demand for semiconductors, backlogs and lead times were predicted to extend into late 2021.

Another fire broke out at the Asahi Kasei Microdevices (AKM) semiconductor plant in Miyazaki, Japan, in October 2020, that left the factory severely damaged and out of operation. The semiconductor manufacturer communicated to customers that they should switch to alternative products, and they would work with a third-party manufacturer until the AKM plant could reopen. Panic ensued in the market, which led prices to skyrocket in the days following the fire. Customers stocked up on supplies to attempt to prevent further disruption in their supply chains.

The pandemic, raw material shortages and demand all weighed on semiconductor manufacturers in 2020 with no reprieve in sight. For global chipmakers to adjust, supply chain resiliency became more crucial to remedy shortages and companies to deescalate interruptions.

2021 – An Opportunity for Growth in Global Supply Chains, but will Industries Persevere?

After a tumultuous year in 2020, it appeared there might be some light at the end of a long, long tunnel for some industries in 2021. In the new year, companies were optimistic with the rollout of 5G, the rebound of the automotive sector, a heightened need for datacenters and increasing reliance on AI and IoT, which would mean growth for businesses. However, shortages that were originally attributed to the pandemic continued to worsen with demand growth, raw material shortages and catastrophes.

In Q1 2021, distributor inventories were under allocation and end-customer supply was very tight for a variety of components. The numerous shortages caused stunted growth and led manufacturers to fight over resources. The first quarter led to another dark tunnel for global markets with the outlook for Q2 2021, which forecasted a continued struggle for chipmakers to fulfill orders across a variety of industries—a struggle that would force companies to decrease their production lines or stop them altogether.

Semiconductor production continued to take additional hits when Renesas’s Naka factory in Japan experienced two detrimental blows in a brief time period, further impacting the wafer shortage that originally began in 2019. In February 2021, an earthquake caused a blackout that temporarily suspended production, but had minimal repercussions. The second blow struck the same plant when a fire broke out in March. The fire effected a building where two-thirds of the wafers produced were used in automobile production, and created additional woes for automakers.

Concurrently in February, the commodity chip supply chain suffered another disruption when Texas reported widespread power outages and rolling blackouts caused by Winter Storm Uri. Major manufacturers Samsung, NXP and Infineon suspended plant operations due to the Texas storm. The extent of the disruption will not be known until further into Q2.

Looming effects of the drought in Taiwan delayed market recovery and could exponentially worsen shortages in Q2 2021. Taiwanese plants and foundries produce roughly 53% of the global semiconductor market and four of the ten foundries have facilities in Taiwan.

Events so far in 2021 exemplified the downward trajectory global markets are expected to face with intensified shortages, disasters and lack of raw materials.

Looking to the Future

Geographical diversification of chipmaking is one solution companies are opting for in a strategic move to secure the supply chain and provide a long-term fix amid the turbulence the semiconductor industry has experienced. In their initiatives to do just this, US companies have urged the Biden administration to invest in domestic semiconductor manufacturing to buffer supply chain shocks and shortages, as well as reduce dependency on Asia, which is where 75% of chips are produced. The semiconductor industry could receive $50 billion to expand US chip manufacturing if President Biden’s infrastructure proposal is approved by Congress after review.

Proactively, two of the world’s largest chipmakers, US-based Intel and Taiwan-based TSMC, plan to build new semiconductor factories in the US. In 2020, TSMC announced it would be spending $12 billion to build a factory in Arizona with expected production to start in 2024. Intel then announced its plan to build two of fabs in Arizona and upgrade another in New Mexico (cumulatively spending $23.5 billion) expected to be operational in 2023. Intel intends for these factories to be a US and Europe alternative to Asian chip factories.

The continued trade war between the US and China is another reason chipmakers view geographical diversification as a solution to temper the semiconductor supply chain. Since 2018, the tariffs have caused a $5.36 billion decline on Chinese imports of semiconductors.

The tariff increases over the years and unpredictable circumstances have caused major blows to many companies in a variety of industries dependent on chips. Expansion and further investment in semiconductor factories will not be a one-off solution and is not an overnight fix by any means but does offer an optimistic outlook.

This article was written & submitted by Fusion Worldwide, a global open-market distributor of electronic components, based in Boston, MA.