Electric meters measure the amount of electricity used by any building, home or property. Since electricity was first sent to homes, these meters have been read manually and provide the power utility companies the usage for billing purposes. The majority of meters today are still analog, with dials and wheels that can be confusing to read for consumers, businesses and landlords. 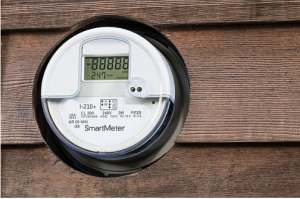 In recent years, smart meters have been introduced into the market that are now more consumer-friendly. These digital meters not only measure how much electricity is used, but they can share this information with users and power utility companies over wireless networks. Smart meters can provide hour-by-hour information regarding consumption, allowing consumers to understand their usage compared with peak and non-peak hours. In addition, smart meters reduce costs for power utilities by enabling automated meter reading. However, several concerns have arisen about the reliability of smart meters. These concerns can often be overcome by the use of reliable X2 or AC capacitors that are specifically designed for such applications.

As a result of the cost savings of automated meter reading, power utilities continue to introduce smart meters to the market. As they evaluate and manufacture these meters, they look to highly-reliable components that have a long service life and can withstand the environmental conditions in which meters are placed. One of the biggest issues with power meters, which are normally installed outdoors, is their location.  Consequently, they are exposed to humidity and significant fluctuations in temperatures, both of which can change rapidly. This has two major impacts on the design of the meter.

First, humidity and temperature fluctuations can affect the reliability of measurement for smart meters, which is unlike analog meters that have a conventional electromechanical design resulting in reliable measurement regardless of the environmental conditions.

Second, smart meters normally utilize a capacitive power supply in which the AC capacitor is permanently connected in series to the power line. Humidity and temperature fluctuations can diminish the lifespan of conventional capacitors, which can lead to malfunctions in this particular type of power supply. Traditional EMI suppression capacitors have long been used in smart meters for this circuit position because they are typically UL or ENEC certified and represent a safer choice than other components. However, these capacitors are not designed to meet the rugged environmental requirements nor the long-term operation requirements of power meters.

Designed for harsh use

Consequently, component manufacturers needed to develop X2 or AC capacitors that can not only withstand harsh climate conditions for up to decades, but also offer extremely stable capacitance values throughout that time. This is not an easy task due to the specific requirements needed for such applications. For example, TDK developed the EPCOS B3293* heavy duty series of AC film capacitors, which combine the extremely stable capacitance values under AC load with the ability to operate reliably in harsh environmental conditions. These maintain the safety certification for an X2 rating and have been designed with a relatively small footprint. X2 capacitors are typically preferred due to their IEC 60384-14 and UL 60384-14 ratings and safety certifications. And, X2 capacitors are designed to offer EMI suppression as they function in parallel with the power line. In capacitive power supplies, however, the capacitor is connected in series with the load.

Threats to capacitors in harsh environments

In addition to the typical harshness of outdoor environments being a danger to smart meters, the interaction of a high AC voltage in combination with high temperatures and high humidity levels can cause the metallization edges of the electrodes to degrade resulting in a drop of capacitance and degradation of performance. These three conditions of high AC voltage, high temperature and high humidity levels are detrimental to conventional capacitors over time and are the biggest threats to capacitors in these harsh environments. Therefore, capacitors used in smart meters must be designed to withstand these conditions.

To avoid the destruction of the electrodes because of high AC voltage, some X2 capacitors are designed with an alternating metallization pattern. This pattern creates two capacitor circuits in series thereby cutting AC voltage in each capacitor circuit by 50 percent. This significantly prolongs the life of the capacitor. It also adds a new level of reliability by providing a second capacitor circuit in the case of a short or other failure in the other capacitor circuit. This allows the power supply to continue to function uninterrupted.

Metallized film capacitors are a very prudent and safe technology due to their self-healing features, which allows weak dielectric areas to be burned out as overvoltages appear. They also can withstand temperature levels of 105 °C and overvoltages of up to 1000 V. Such application-specific capacitors are the most ideal to address the threats to capacitors in harsh environments and are the best alternative for high capacitance values, high peak voltages, high temperature levels, and X2 safety requirements. The majority of X2 class EMI capacitors are based on polypropylene (PP) film. However, capacitors based on polyester (PET) film offers better resistance to high temperatures, enabling capacitors that are suitable for higher operating temperatures of up to even 125 °C. In addition, PET has a dielectric constant of 3.3 is 50 percent higher than that of PP film and is therefore better suited for the harsh environments within smart meter applications.

It is essential to prevent moisture from entering the component in order to increase the capacitor’s resistance to humidity. To meet this requirement, a resin filling is employed along with a metallic spray for connecting the leads. In some cases, a plastic film is used that is not metallized with zinc.

It is a standard practice to use zinc in X2 and AC capacitors, however, zinc is very sensitive to humidity and corrodes quickly when exposed to moisture and high temperatures.  Consequently, zinc is not ideal for use in any outdoor meter installations, let alone smart meter applications, where capacitors must offer a very high capacitance stability and comply with the extremely high safety requirements – even in the harshest of conditions. 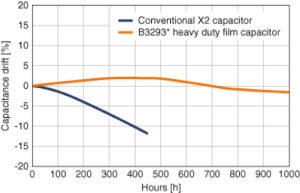 The capacitance of the EPCOS B3293* heavy duty series remains extremely stable with a drift of less than 2 percent in comparison with conventionally-designed X2 capacitors.

Under standard testing conditions (85 °C, 85 percent relative humidity, 275 V AC), X2 and AC capacitors should see significant improvement in performance and only exhibit a capacitance drift of less than 2 percent after 1000 hours. Capacitors that do not utilize the design techniques outlined in this article drift in excess of 10 percent after only 500 hours.

At a minimum, the reliability of capacitors used in smart meters should meet the rigorous requirements of the IEC 60384-14 standard, which specifies a maximum capacitance drift of 10 percent after 1000 h at the maximum temperature for the climatic category and at 1.25 times the rated voltage.

Because of the demands of smart meters and concerns about reliability, only X2 and AC film capacitors that are specifically designed to meet the harsh environmental requirements of smart meters should be used in such applications. They should fulfill the IEC60384-14 requirements for safety certification. Thanks to their reliable performance at high humidity, such capacitors are well suited for use in the growing number of smart meters.