More and more, people rely on their wireless devices to manage email, social media, banking, and downloading or streaming videos and movies. In order to support these activities, consumers are demanding higher data rates and better signal integrity from their mobile devices. LTE and LTE-Advanced are becoming more mainstream in many markets today and next generation standards in 5G are in the early research and definition phase. In cellular, LTE-Advanced is the next big technology growth area to keep up with consumer demand until we start to see roll outs of 5G.
Today, many wireless providers are working to improve connectivity and peak data rates of their mobile communications systems through implementation of LTE-Advanced multi-antenna techniques. Multi-antenna techniques are also used in wireless LAN standards like 802.11n and 802.11ac. Multi-antenna techniques are a key technology used to add capacity to a system by increasing the number of antennas at the transmitter, receiver or both.
Specifically, multi-antenna techniques are implemented to achieve better spectral efficiency and increased peak data rates. The techniques used today include:

* Spatial multiplexing – is a technique used in MIMO (multiple input, multiple output), where two or more antennas are used on both the transmitter and the receiver. This multi-antenna technique is used to improve spatial efficiency. With MIMO, independent and separately encoded data signals (data streams) is transmitted from each of the multiple transmitter or receiver antennas. The data from individual antennas, at each end of the communications circuit, are combined to minimize errors and optimize data speed. MIMO is used in many of the higher data rate wireless technologies such as LTE, LTE-A, WiMAX and WLAN 802.11n/ac. The spatial multiplexing technique improves spatial efficiency and data throughput for a single user. Multi-user MIMO is a form of spatial multiplexing that can be used to send data to multiple users simultaneously in the same frequency spectrum. This technique increases system efficiency rather than increasing data throughput rate to a single user.

* Beamsteering or beamforming (when channel feedback is used) uses multiple antennas for directional transmissions to steer a signal in the direction of a specific receiver. The same signal is transmitted from two or more spatially separated transmitters simultaneously. Magnitude and phase adjustments are applied so that multiple transmissions can combine destructively or constructively. The constructive (or in phase, coherent) signals combine constructively and create a beam pattern. With the constructive combination, the combined signal provides much more energy at the receiving antenna, resulting in better signal robustness and improved signal to noise ratio at the receiver. Benefits of beamsteaming/ beamforming include selectivity, interference management with increased gain and better SNR.
These multi-antenna techniques are used in today’s wireless communications. Multi-antenna techniques with multi-user beamforming is expected to be a critical technology for 5G, utilizing hundreds of antennas at the basestation, communicating with multiple devices at one time. This is also known as Massive MIMO.
Design and development of communication systems using multi-antenna techniques presents a number of challenges. As the number of antennas increase, engineers are faced with system verification tests that are much more complicated than previous configurations. There are new challenges for validating multi-antenna configurations including the need to analyze the multiple transmit or receive chains simultaneously; and for MIMO configurations the need for a multi-channel synchronized test. In addition, in beamforming applications, it’s critical to have precise timing and synchronization between channels; and phase coherency to ensure proper inter-channel phase and magnitude measurements. To address these test challenges, multi-channel synchronized test systems are helpful, providing scalability and the ability to use shared resources for triggering and synchronization.
PXI test solutions are ideal because they can provide channel count scalability as well as time and phase synchronization to support MIMO and beamforming tests.
Synchronization between signals, or channels can be quite difficult to achieve when considering all the synchronization that needs to take place in the multiple instrument environment. Typically, a master reference signal is used to align all the clk signals. In the case shown in Figure 1, the master reference signal uses one PXI trigger line to send an initialization trigger to all the slave modules. Once all channels are armed, then, the master unit signals a trigger event and all modules will start on the next 10 MHz clk edge. This method ensures that all start actions are aligned so that data capture or playback is started simultaneously on all channels. 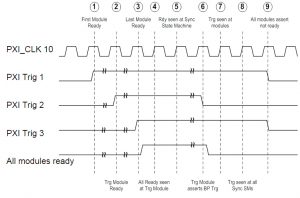 A common clock reference provides time alignment but not phase coherence. This can be a problem in beamforming applications since magnitude and phase shifts are used to create the beam pattern. Phase coherency between channels is typically needed to simulate the real world transmission or measurement. Two signals are said to be phase coherent if they have a constant, relative phase at all instances in time. If each signal generation or measurement channel has its own independently generated signal, then each channel would have its own phase properties. This makes it difficult to achieve a constant relative phase between the multiple channels.
A phase stable relationship between generated signals or measurement channels can be achieved using modular instruments that provide phase coherency between the channels. One method to achieve true phase coherency is to use a shared local oscillator (LO) with each channel to ensure that all channels have the same phase properties. By sharing an LO, each downconverter in the analyzer or each modulator in the source share the same phase characteristics including phase error and the RF paths can be fully characterized given the constant phase and channel to channel skew (delay in paths for each instrument). See figure 2. With this approach, the multiple signals can construct and destruct properly. 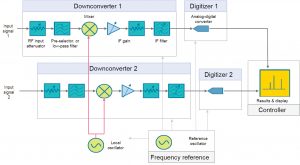 It is important to accommodate for the magnitude and phase differences between channels in a measurement system. Without calibration, there is some degrading of measurement results. Using calibration to correct for the offsets will ensure that any measured differences are due to the device under test and not the test equipment. Corrections are achieved by measuring the channel-to-channel differences and applying adjustments. This can be done by generating a known reference signal on each source channel, one at a time, to each analyzer channel and measuring the result. Figure 3 shows how the calibration can impact the accuracy of the beam pattern. 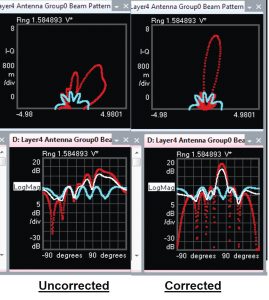 Figure 3: Measuring beam patterns with out and with time and phase corrections

To summarize, multi-antenna techniques are becoming increasingly common in today’s wireless communications systems, and will be used even more in 5G communication systems. Engineers will be challenged to develop test and verification system for complex multi-channel systems. Modular instrument platforms help to address these challenges with scalable channel count, channel-to-channel synchronization, and with phase coherency and other features providing the right tools for today’s and tomorrow’s measurement system.
Keysight offers time synchronous, phase coherent multi-channel modular test solutions that include vector signal generators (VSG) and vector signal analyzers (VSA) which share a common LO and can scale in channel count and be used for complex multi-antenna MIMO and beamforming tests.