Discovery capable of powering wearable electronics – even in extreme cold

A new material designed by researchers at the University of Toronto’s Faculty of Applied Science & Engineering combines the flexibility of human skin with improved conductivity and tolerance of temperatures as low as -93 C.  Known as ionic skin, or iSkin, the substance could enhance a wide range of technologies – from wearable electronics to soft robotics.

The substance, which belongs to a family of materials called hydrogels, is described in detail in a paper published recently in the journal Advanced Functional Materials. 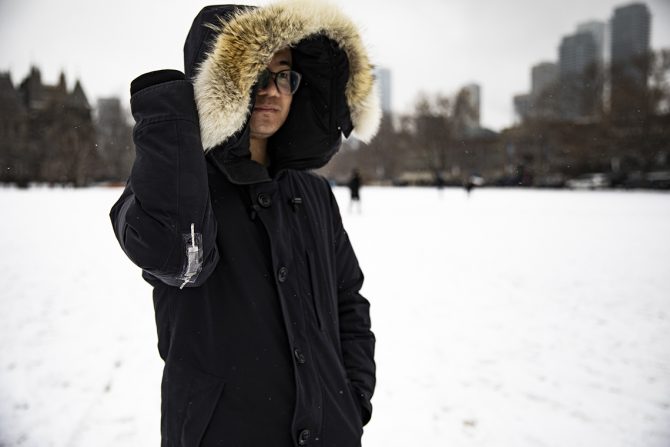 “Hydrogels are cross-linked polymers that are able to hold a lot of water within their chemical structures,” says Binbin Ying, who is now completing post-doctoral work at MIT but led the design of the material while pursuing graduate studies at McGill University and simultaneously working as a visiting PhD student in the lab of U of T Engineering Professor Xinyu Liu.

“Many of the tissues in our own bodies are hydrogels, so they are often used in applications where biocompatibility is important such as cosmetics or tissue engineering. But if we want to use them in soft, flexible or wearable electronics, we need to add in new functionalities such as mechanical stretchability and electrical conductivity.”

Last year, Ying and Liu unveiled an earlier iteration of iSkin that showed off some of its capabilities: it is self-powered, nontoxic and can stretch to 400 per cent of its original size.

Most importantly, bending the material creates a proportional change in its conductivity. This enables it to convert physical movement into an analogous electrical signal.

“A physiotherapist could stick it on your knee or your elbow to measure when and by how much your joint is moving,” says Liu. “We’ve also coated it on a glove, enabling us to measure and track hand movements, which, in turn, can be used to control a robot. It’s a very versatile way to facilitate all kinds of human-machine interactions.”

With contributions from undergraduate students Ryan Chen, Runze Zuo and PhD candidate Zhanfeng Zhou, the researchers are exploring further applications of iSkin. For example, adding patches of the material to a mechanical gripper provides a set of feedback signals that is unique to each item being gripped. Analyzing the combinations of signals can then enable the robot to “feel” what it’s picking up. In combination with artificial intelligence algorithms, the robot can even learn to discriminate between items that are hard versus soft, round versus cubic, etc. – and sort them appropriately.

Until now, iSkin suffered from a drawback common to all hydrogels: when the water within it freezes, the resulting ice crystals can do serious damage to the complex polymer matrix. Cool, dry air can also suck the remaining liquid water out of the hydrogel.

Ying and his team members addressed the problem by adding glycerol, a non-toxic chemical commonly used in everything from foods to hair gel. After carefully testing hundreds of possible recipes, they developed a new iSkin formulation that increases cold tolerance without sacrificing the material’s other useful properties.

As an added bonus, the new formulation enables the hydrogel to adhere even more easily to both skin, clothing and other materials.

“We stuck it to the outside of a jacket and walked out into a Toronto winter, where it was 10 degrees below zero,” says Ying. “We were able to take the same kinds of measurements as we did in the lab.”

Cold tolerance and improved stickiness further increase the list of possible applications for the material. For example, the sorting mechanical gripper could now operate in a low-temperature storage facility where it would be uncomfortable for a human to work.

The team also envisions other possibilities, including soft robots designed to clamber over rough terrain in arctic environments. In the future, they plan to continue to develop the material and potentially miniaturize it.

The research received support from the Natural Sciences and Engineering Research Council of Canada and Canada Foundation for Innovation, among others.