By Lisa Kulick, Carnegie Mellon University College of Engineering  May 30, 2018

Many natural organisms have the ability to repair themselves. Now, manufactured machines will be able to mimic this property. In findings published this week in Nature Materials, researchers at Carnegie Mellon University have created a self-healing material that spontaneously repairs itself under extreme mechanical damage. 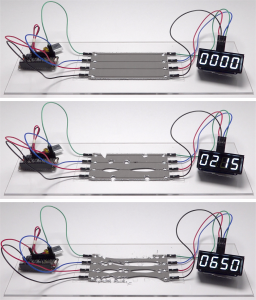 This soft-matter composite material is composed of liquid metal droplets suspended in a soft elastomer. When damaged, the droplets rupture to form new connections with neighboring droplets and reroute electrical signals without interruption. Circuits produced with conductive traces of this material remain fully and continuously operational when severed, punctured, or had material removed.

“Other research in soft electronics has resulted in materials that are elastic and deformable, but still vulnerable to mechanical damage that causes immediate electrical failure,” said Carmel Majidi, an associate professor of mechanical engineering. “The unprecedented level of functionality of our self-healing material can enable soft-matter electronics and machines to exhibit the extraordinary resilience of soft biological tissue and organisms.”

Wearable computing among the applications for its use

Applications for its use include bio-inspired robotics, human-machine interaction, and wearable computing. Because the material also exhibits high electrical conductivity that does not change when stretched, it is ideal for use in power and data transmission. Think of a first responder robot that can rescue humans during an emergency without sustaining damage, a health-monitoring device on an athlete during rigorous training, or an inflatable structure that can withstand environmental extremes on Mars.

Majidi, who directs the Integrated Soft Materials Laboratory, is a pioneer in developing new classes of materials in the fields of soft matter engineering and soft robotics.

“If we want to build machines that are more compatible with the human body and the natural environment, we have to start with new types of materials,” he said.

Majidi holds a courtesy appointment in the Robotics Institute. Other authors include Eric Markvicka and Xiaonan Huang of Carnegie Mellon University, and Michael D. Bartlett of Iowa State University.