Written by U of T professors 40-years ago, e-book released in time for COVID-19

Nearly 40 years ago, the University of Toronto’s Adel Sedra and K.C. Smith – both engineering professors at the time – launched what would become the classic introductory textbook for students and instructors of electronics, selling more than one million copies. 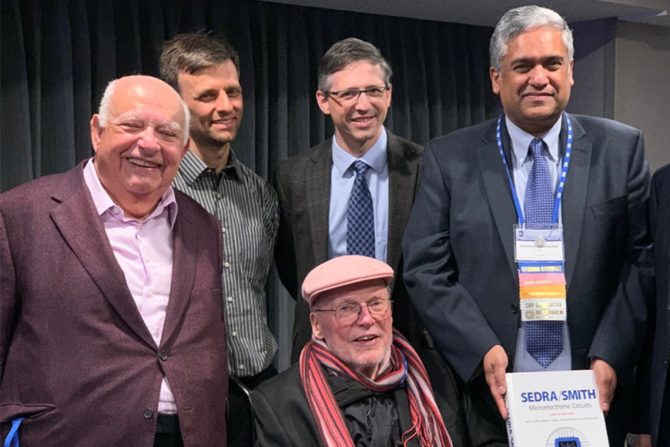 At the launch of the eighth edition of Microelectronic Circuits in February, from left to right: Adel Sedra, Tony Chan Carusone, Vincent Gaudet, K.C. Smith (seated) and Anantha Chandrakasan (photo by Danny Zhang)

Now, the eighth edition of the text is being made available as an enhanced e-book, making it ideally suited for virtual course delivery in the era of COVID-19.

Microelectronic Circuits, known simply to students and instructors in the Faculty of Applied Science & Engineering as “Sedra/Smith,” was revolutionary when it first appeared in the early 1980s. To that point, the study of electronics had begun with first principles, a bottom-up approach.

“Sedra/Smith was the first book to say, if we’re really going to take full advantage of this new technology, we can’t be starting from ground zero all the time,” says Tony Chan Carusone, a professor in the Edward S. Rogers Sr. department of electrical and computer engineering and one of the new edition’s four authors. 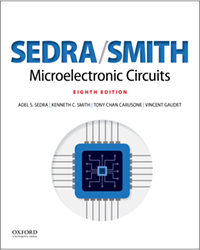 Sedra/Smith’s reputation as the go-to textbook was further cemented by the richness of its problems and the expressiveness of its prose. The sustained effort to keep it up to date, with new editions every five years, meant that even an instructor from outside the field could step in and find everything they need.

Today, the book has sold more than one million copies and has been translated into 11 different languages.

“It’s not just a textbook. It’s a good read too,” Chan Carusone says.

Chan Carusone recalls a breakfast five years ago when Sedra first proposed that he take on the co-authorship of the next edition.

“I jumped at it,” he says. “I was honoured. It was important to me to keep U of T’s tradition as a worldwide leader in electronics.”

He was joined by U of T Engineering alumnus Vincent Gaudet, a professor at the University of Waterloo.

The guiding principle behind the digital enhancements in the eighth edition was to make Sedra/Smith an even better teaching tool. Pop-ups over figures and equations provide quick reference, while collapsible tables preserve the reading flow. The show/hide function on each problem’s solution eliminates the need to constantly flip to the end of the book, and the work now includes 40 instructor videos linked to pivotal concepts in the material.

“We shot these videos using lightboard technology, writing with a marker on an illuminated pane of transparent plexiglass,” says Chan Carusone. “When you film it from the other side of the glass, you can see both my face and writing floating in midair. 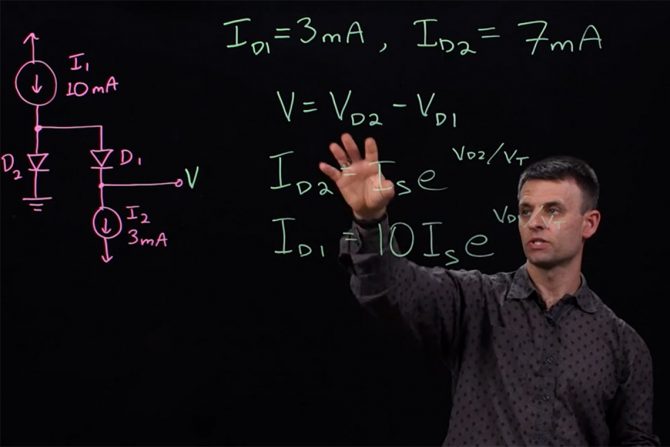 Chan Carusone emphasizes that the writing process – which took five years and reduced the overall length of the book by about 200 pages – was collaborative.

“We surveyed both users and non-users of the book, and everyone was incredibly receptive and generous with feedback,” he says. “So many people felt they had a stake in this book.”

The new edition is arriving just as engineering schools around the world ramp up their efforts in e-learning. For example, changes to this year’s U of T Engineering classes include a remote access guarantee, which will allow every student to complete all academic requirements remotely.

Chan Carusone hopes the care and effort that has gone into the enhanced digital content of “Sedra/Smith” will resonate with students.

“This is the first time I could imagine someone having only the e-book,” he says. “But in light of the recent pivot to online learning, this version could provide a better learning experience than the hard copy.”