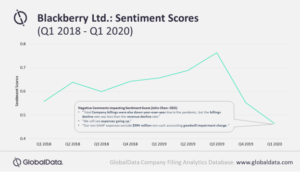 Blackberry’s sentiments declined by 16% in the fiscal first quarter of 2020, compared to Q4 in 2019, due to revenue and gross margin drops in its struggling software services segment, according to GlobalData, a leading data and analytics company.

The revenues declined by approximately 12%. The performance of Cylance, a part of the software services segment, remained subdued throughout the period, even as cybersecurity demand surged due to increasing work-from-home policies during the pandemic, says GlobalData, a leading data and analytics company.

“Blackberry’s decline comes as a surprise, as endpoint security competitors such as Crowdstrike have shown revenue growth of 85% in Q1 2020,” says Rinaldo Pereira, senior analyst at GlobalData. “Furthermore, despite reducing Q1 2020 estimates in February 2020, Blackberry was unable to match its expectations.”

Pereira continues: “According to Blackberry, headwinds in the automotive and embedded systems businesses caused a decline in revenues. However, Cylance’s year-on-year quarterly revenue slump (around 4%) also played a significant role in the company’s sentimental drop.” 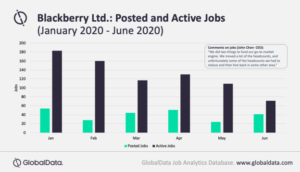 Interestingly, mentions of ‘Cylance’ in earnings transcripts were down 81% in Q1 2020, compared to Q4 2019, as tracked by GlobalData’s Filing Analytics platform. Blackberry has not emphasized on solutions to improve Cylance’s performance in the earnings transcript, yet it is optimistic about the subsidiary’s customer growth.

Under Cylance, now referred to as the Spark platform, Blackberry faced goodwill impairment charges of US$594m during Q1 2020. Nevertheless, Blackberry seems optimistic and expects double-digit growth post the pandemic situation. However, the cybersecurity firm did not issue any guidance in contrast to its counterpart Crowdstrike, which raised its full-year expectations.

Blackberry’s posted and active jobs have also been volatile, suggesting that it is conservative in its investments. Cash and investments were down 3.5% by the end of May 2020 as compared to February 2020. Blackberry further commented on maintaining a headcount balance by hiring in certain divisions and cutting of jobs in another, while focusing on senior-level hiring.

Pereira concludes: “Blackberry has moved on from phone manufacturing to focus on software solutions. In 2019, Cylance was expected to be a key part of its future cybersecurity gains. However, its 2020 (to May) performance has been substandard. With work-from-home policies likely to continue until the end of 2020, it will be fascinating if Blackberry gains ground and improves Cylance’s performance, as the management has commented on improving margins.”