Nearly everyone expects to pay more money for 5G smartphones—but the cost of the initial wave of phones is dramatically exceeding expectations, with the price premium as much as 29 times higher than many consumers anticipate, according to a new IHS Markit survey examining consumer perceptions regarding the technology.

A total of 91 percent of survey respondents said they expect to pay more for 5G devices compared to existing 4G LTE smartphones. Three quarters of respondents stated they foresee paying an additional 10 to 25 percent for a 5G-capable phone. With the average sales price (ASP) of a smartphone amounting to $319 in 2019, a 10 percent hike in pricing would add $32 to the cost, while a 25 percent increase would boost it by $80.

However, the actual pricing of the first wave of 5G phones is far higher. For instance, Samsung’s S10 5G phone is retail priced at $1,300, a 335 percent premium compared to the $388 average for the company’s existing 4G smartphone models. In dollar terms, this would represent a $912 increase in price, an order of magnitude higher than consumers’ expectations.

It should be noted that this comparison is of a flagship smartphone price against an industry ASP. Naturally, newer technologies almost always come first to premium smartphones, which typically are two to three times as much as industry ASP. Also, given the nature of 5G radio design, these early 5G smartphones are configured with larger-than-typical displays and packed with extra features such as time-of-flight (ToF) cameras to enable AR applications. All of these extras do contribute to a higher-than-expected retail price from a consumer perspective.

This pricing discrepancy could instil sticker shock among many consumers. While such pricing premium is not likely to impact early adopters, it could slow sales of 5G devices to the wider, more mainstream consumer market.

“The 5G market is primed for massive growth, with the transition to the new technology expected to occur at a much faster pace than any previous wireless generation during the first five years of deployment,” said Joshua Builta, senior principal analyst at IHS Markit. “However, as with each new wireless generation, the first wave of phones carries sky-high costs because of the additional electronics required to support the enhanced features. With smartphone brands passing these additional costs down to consumers, many buyers will be turned off by the high prices and will wait until they come down before purchasing a 5G phone.” 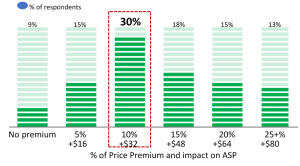 Global 5G handset shipments are expected to soar to 424.5 million units in 2023. However, shipments will start rather modestly, amounting to just 9.5 million in 2019—the first year of deployment—and only 73.7 million in 2020. This represents a slower initial rate than for 4G LTE when it first deployed a decade ago, although the longer-term outlook for subscriber growth for 5G is more optimistic than for 4G.

The early 5G smartphones analyzed by IHS Markit demonstrate why their cost and pricing is so elevated. For example, some 5G phones include a highly complex radio-frequency (RF) subsystem designed to support millimeter wave capability for high-speed data transfer. Specifically, in the U.S., the Moto Z3 with 5G Mod and a version of the Samsung Galaxy S10 5G both integrate multiple separate millimeter wave antenna modules that are strategically placed throughout the device to allow clear signal reception. When considering that most smartphone designs employ just one antenna module, it’s easy to see how this redundant design drives up costs significantly.

Lower prices for a bigger market

However, just as occurred in the 4G LTE era, 5G phone pricing is expected to decline quickly. Prices will begin to decrease next year as phone OEMs use more efficient designs employing multimode modems. Within the next few years, prices will fall to between the $700 to $800 range, making them more affordable for price-conscious consumers.  Elsewhere, markets such as China will deploy a standalone (SA) 5G network which will further simplify RF front-end design requirements to further push down the industry ASP.

Many consumers equate 5G with faster data speeds and aren’t aware of the technology’s other benefits. As a result, their low expectations for pricing premiums may not take into account all of the advantages and allures of 5G technology.

For example, improved immersive entertainment experiences like virtual reality (VR) have been cited as a key benefit of 5G. The 5G standard eventually can provide the kind of ultra-low latency that VR requires. However, fewer than 30 percent of survey respondents said they would increase their use of VR with the arrival of 5G.

As the market waits for prices to decline, brands may be able to overcome consumer reticence regarding pricing by promoting the other attributes of 5G beyond speed.