Intel in the second quarter maintained its position as the world’s largest semiconductor supplier, although second-placed Samsung managed to close the gap due to renewed vigor in some key memory products, according to IHS Markit. 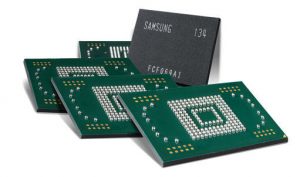 Intel extended its leadership reign for the third consecutive quarter with revenue of $15.5 billion in the second quarter, as reported by the IHS Markit Semiconductor Competitive Landscape Intelligence Service. However, company semiconductor revenue declined by 2.1 percent from $15.8 billion in the first quarter.

Samsung posted chip revenue just short of $13 billion in the second quarter. In contrast to Intel, Samsung managed to attain sequential growth, with revenue rising 6.6 percent from the first quarter.

“Despite the fact that the memory chip market remains pressured by falling prices, weak demand and excess inventory, Samsung in the second quarter managed to find some growth opportunities for its memory products,” said Ron Ellwanger, senior analyst, semiconductor manufacturing at IHS Markit. “Samsung has started to see some recovery in NAND and DRAM memory due to strong demand for its high-density products from the mobile and storage segments. NAND sales specifically are benefitting from the higher adoption of solid-state drives (SSDs) in data centers and from the arrival of new smartphones that have expanded memory content.”

However, on a sequential basis, the memory market showed some life in the second quarter, with DRAM revenue rising 4 percent compared to the first quarter, and NAND declining by just 5 percent.

Intel suffers in data centers, but prospers in the IoT

Intel’s continued semiconductor leadership was highlighted by its strong performance in the internet of things (IoT) market. Intel’s revenue growth in IoT is being driven by its sales of products including industrial PCs that incorporate the company’s microprocessors.

Despite this, the company’s performance in the data center market has been negatively impacted by slow demand from cloud service providers (CSPs). The CSPs are currently digesting inventory of server and storage array products, causing them to reduce purchases of new equipment that employs Intel’s chips. Moreover, Intel is also facing increasing competition in its core microprocessor business from chief rival Advanced Micro Devices and from ARM-based chips supplied by various competitors.