One-third of U.S. homes (31%) now own a smart speaker – up from 8% only three years ago and a record-setting example of Americans embracing AI-enabled devices – according to a new Consumer Technology Association (CTA) study. Smart speakers experience second consecutive year of almost 100% exponential growth in household ownership. 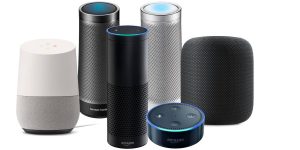 “Americans are embracing AI tech in the home at unprecedented levels,” said Steve Koenig, vice president of research, CTA. “The dramatic rise in household ownership of intelligent devices like smart speakers shows American consumers endorse the benefits and convenience of artificial intelligence and voice recognition to help them with everyday tasks.”

The Three Screens – TVs, smartphones and laptops – top U.S. household ownership once again. TVs retain their title as the most owned tech product at 95% household ownership. Smartphones are now owned in 91% of U.S. homes and, for a third consecutive year, have the highest combined intent to purchase (38%) among repeat and first-time purchases for the next year. Laptop ownership increased again to reach 75% household penetration.

Smart appliances are owned by 17% of households, with smart light bulbs, thermostats, home security cameras and robotic vacuums rounding out the most-owned smart home devices in 2019.

Smart home devices will see the biggest gains in household adoption in the next year as first-time purchasers make up the largest proportion of prospective buyers, led by households planning to buy smart door locks, smart door bells and smart home hubs for the first time.

U.S. households adopted wireless earbuds and headphones in greater numbers over the last year, with growth outpacing their wired counterparts. Combined wireless earbuds and headphones ownership is now at almost half (48%) of all U.S. households, with a strong intent to buy (33%) which will likely carry the category to outpace wired products very soon.

Among wearables, smartwatch adoption grew by five percentage points to reach 23% household ownership in 2019, narrowing the gap with fitness trackers, which grew four percentage points and are now owned by 29% of U.S. households.

“Innovation is spurring demand for emerging technologies and driving consumers to upgrade existing devices,” said Koenig. “The paradigm in consumer technology is rapidly evolving to a new IoT – The Intelligence of Things. AI, voice recognition, sensors, wireless connectivity and more are bringing greater capabilities and convenience to consumers.”=

CTA’s 21st Annual Consumer Technology Ownership and Market Potential Study was administered as an online survey among 2,608 U.S. adults (18+) between March 7-14, 2019. It is designed and formulated by CTA Market Research, the most comprehensive source of sales data, forecasts, consumer research and historical trends for the consumer technology industry.