The International Conference on Robotics and Automation (ICRA) 2019 will be held May 20-24 in Montreal (Quebec), Canada, renowned as one of the world’s innovation hubs.  Four of Canada’s fastest growing robotics companies will be there to represent the nation’s rise as a global leader in innovation and robotics technology as the world adapts for Industry 4.0.

Kinova, headquartered in Boisbriand, Quebec, will be demonstrating their robotic arms at Booth 611, showcasing the adaptability of their open software and modular hardware for research and industry applications. Kinova partners with over 500 research organizations in more than 40 countries to advance human-robot collaboration. 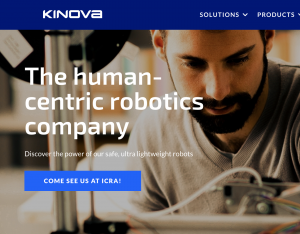 Robotiq, a leading provider of tools and software for the collaborative robotics (cobots) market, will be showcasing their 2F-85 Adaptive Gripper at Booth 519. Robotiq Adaptive Grippers are designed to work perfectly with collaborative robots for a fast, easy Plug + Play integration. Headquartered in Quebec City, Canada, Robotiq aims to lower the barriers to entry for industrial automation and allow companies to automate in areas considered too complex or costly.

Element AI, headquartered in Montreal and delivering AI products at scale to help people work smarter, will be present at booth#616 to demonstrate its latest work in applied AI research and robotics via a demo on visual anomaly detection. This activity is an extension of the company’s research in robotics, focusing on tackling tough, multidisciplinary challenges where AI and engineering intersect.

Clearpath Robotics, headquartered in Waterloo, Ontario, will be bringing their fleet of robots and presenting some exciting new demos at Booth 606. For the first time, they will be hosting an outdoor demo of their new navigation software packages, includingVisual Teach & Repeat, GPS Waypoint Navigation and Teleoperation.

Helping to position Canada as one of the most innovative and competitive countries in the global economy, the Government of Canada officially released the Building a Nation of Innovators report last February, which portrays a new approach to innovation policy in Canada. This plan will aim to develop a culture of innovation, stimulate growth and create jobs.