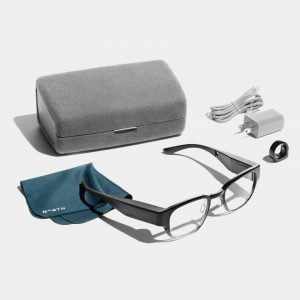 If you ask Aaron Grant how wearable smart glasses have fared on the consumer market over the last decade, he’ll jump to tell you “there have been no hits.”

But that isn’t stopping him from his latest venture: selling wearable smart glasses. Grant and his fellow co-founders of Waterloo-based North, Matthew Bailey and Stephen Lake, have spent the last four years developing their $1,299, battery-powered Focals glasses so they can receive and send text messages, order Uber rides, display the time and weather and do anything Amazon’s voice-based virtual assistant does _ all while looking stylish and accommodating prescriptions between -4 and +2 and 0 to -2.

Their predecessors, Google Glass and Spectacles by Snapchat, came with high-tech features too, but Grant said North is focused on not ending up like either product – seldom worn, never meaningfully adopted by the masses and often lambasted by critics for their looks and lack of usefulness.

Instead, Grant said North’s bid to conquer the notoriously difficult wearables market is centred around a measured approach that begins with the brand only opening two stores – one in Toronto and another in Brooklyn, NY – in early November. It won’t be publicizing sales and adoption goals or trying to overwhelm customers with a dizzying array of features.

“We are not trying to be everything for everyone,” said Grant. “It is much better to have a product that at least in the early stages has a small group of people who absolutely love it and use it all the time and get a ton of value from it rather than to throw in every bell and whistle.”

Limiting functionality could be risky for a brand intent on growing, but North considers it key, said Adam Ketcheson, the company’s chief marketing officer. They’ve intentionally designed Focals so they’re off most of the time. Users only see messages or functions floating about an arm’s length from the lens when they get a notification or press a small knob on a ring they must wear to control functions.

A tiny speaker that works with Alexa

North, formerly known as Thalmic Labs, are custom fitted to users so notifications appear at an optimal level on lenses and don’t strain eyes. The lenses are translucent so users can see the space around them while using their functions. A tiny speaker that works with Alexa can also be set, so its volume is not too loud or disruptive to others. North hopes the lack of invasiveness will increase adoption because it won’t force users to miss out on what’s going on around them like a phone would. It’s also convinced users will be impressed it focused first on something predecessors didn’t: style.

Among North’s first hires was an eyewear designer who crafted versions of the glasses in tortoise-shell shapes and light shades of brown, in addition to classic frames and colours that hide most of the bulk other smart glasses have had. The designer was tasked with making the glasses sleek, but also able to fit a tiny projector that can display an image, battery-powered electronics that last all day and a holographic film in a curved lens that can support prescriptions.

Challenges in finding a manufacturer

But perhaps the toughest challenge North faced was finding a manufacturer.

“They would typically look at our specs and say there is no way this is going to happen, it can’t be done, you guys are crazy,” recalled Grant.

That’s why North set up a 5,202 square metre (56,000 square foot) facility in Waterloo. It’s not the brand’s first foray into wearables. The North team was also behind the Myo – a gesture-controlled armband it built six years ago that had plenty of successes, but didn’t take off as rapidly with tech creators as Grant and his co-founders hoped.

“There were a few attempts at products there, but there was nothing great, nothing even good,” he said. “Everything we had been really excited about to use the Myo with wasn’t really materializing in the way we thought it would and that’s because it turns out it is really really hard to do and hard to do well.”

That’s why the focus for Focals will be on learning and pacing the company for meaningful adoption and growth, said Ketcheson.

“We have so much to learn and we need our consumers to learn with us.”