WOLF Advanced Technology, Stouffville ON, manufacturer of military grade rugged boards for video capture, process, encode and display, announced that NASA has chosen two of its video graphics modules for use in the development of NASA’s X-59 Quiet SuperSonic Technology (QueSST) aircraft. The X-59 is designed to reduce the noise generated by a sonic boom. 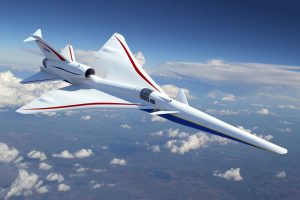 “The X-59 QueSST aircraft will represent a step forward in supersonic aircraft flight,” said Trey Arthur, Aerospace Engineer at NASA, “and the products we’ve chosen from WOLF will help us deliver the visual data our pilots require to meet our mission criteria.”

“WOLF is honoured to be a part of the mission for the development of the X-59,” said Craig McLaren, CEO of WOLF, “and we will believe that WOLF’s advanced video graphics technology will help enable other innovative designs that incorporate ‘windowless cockpits’ for transportation of people in space, at sea, and over land.”

The XMC-E9171-VO features an AMD Radeon GPU, a chip-down rugged design that meets the MIL-810 specification and can handle up to five 4K displays using Display Port 1.4, and High Dynamic Range video with 10-bit color depth.

The XMC-FGX2-SDI-8IO is WOLF’s second-generation Frame Grabber eXtreme (FGX) which enables up to eight 3G/HD-SDI or four 12G-SDI inputs and outputs, two analog inputs and outputs, a PCIe Gen4 interface that can handle up to 15.75 GB/s, ultra low-latency H.265 encoding, and supports direct user access to FPGA HDL logic for encryption, analysis, and image recognition. A 10GigE LAN interface is also supported.