Progress is made with self-healing polymers

There has been considerable progress with self-healing polymers just lately, with the researchers dreaming of use in regular tires and phones. However, analysts at IDTechEx have appraised the technology and potential commercialization of triboelectrics, a new form of energy harvesting based on similar materials and think there is potential for partnerships. 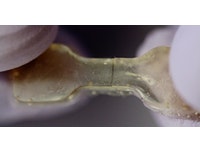 CEO Raghu Das says, “We think there is scope for collaboration here. Triboelectrics are mainly based on polymers including rubbers as with the admirable work at the University of Wisconsin Madison on generating large amounts of electricity from triboelectric tires. There is also the plan of the inventor of Triboelectric Nanogenerators TENG, Professor Zhong Wang at Georgia Tech, to have one square kilometre of wave blanket triboelectrically generate a megawatt of wave energy. That could also reduce coastal erosion at the same time. What these applications have in common is the violence of the duty cycle and self-healing could therefore be useful. Just about everything is triboelectrically active. Fluoropolymers and silicones are among the most popular with researchers at present.”

As for self-healing, researchers from the Harvard John A. Paulson School of Engineering and Applied Sciences (SEAS) have developed a new type of rubber that is as tough as natural rubber but can also self-heal. The research is published in Advanced Materials. Self-healing materials are not new but engineering self-healing properties in dry materials — such as rubber — has proven more challenging. That is because rubber is made of polymers often connected by permanent, covalent bonds. While these bonds are very strong, they will never reconnect once broken. In order to make a rubber self-healable, the team needed to make the bonds connecting the polymers reversible, so that the bonds could break and reform.

Polymer that could stretch to 50 times its original size

Earlier, researchers at the University of California proposed the use of polymer that could stretch to 50 times its original size and heal breaks within 24 hours. Smartphone manufacturers have already used self-healing materials in devices. LG’s G Flex 2 shipped in 2015 with a coating on its back that was capable of healing minor scratches over time, although failed to completely repair heavier damage. Some watch glasses have a measure of scratch repair.

“Previous research used reversible hydrogen bonds to connect polymers to form a rubber but reversible bonds are intrinsically weaker than covalent bonds,” said Li-Heng Cai, a postdoctoral fellow at SEAS and corresponding author of the paper.  “This raised the question, can we make something tough but can still self-heal?”

Cai, along with Jinrong Wu, a visiting professor from Sichuan University, China, and senior author David A. Weitz, Mallinckrodt Professor of Physics and Applied Physics, developed a hybrid rubber with both covalent and reversible bonds. The researchers developed a molecular rope to tie these two types of bonds together. This rope, called randomly branched polymers, allows two previously unmixable bonds to be mixed homogeneously on a molecular scale. In doing so, they were able to create a transparent, tough, self-healing rubber.

Typical rubber tends to crack at certain stress point when force is applied. When stretched, hybrid rubber develops so-called crazes throughout the material, a feature similar to cracks but connected by fibrous strands. These crazes redistribute the stress, so there is no localized point of stress that can cause catastrophic failure. When the stress is released, the material snaps back to its original form and the crazes heal. Harvard’s Office of Technology Development has filed a patent application for the technology and is actively seeking commercialization opportunities.

“There is still a lot more to do,” said Weitz. “For materials science, it is not fully understood why this hybrid rubber exhibits crazes when stretched. For engineering, the applications of the hybrid rubber that take advantage of its exceptional combination of optical transparency, toughness, and self-healing ability remain to be explored. Moreover, the concept of using molecular design to mix covalent and reversible bonds to create a homogenous hybrid elastomer is quite general and should enable development of tough, self-healing polymers of practical usage.”

Healable glass that could potentially be used in phone screens

In a parallel development announced late 2017, polyether-thioureas polymer glass was made to heal breaks when pressed together by hand without the need for high heat to melt the material. The research, published in Science, by researchers led by ProfessorTakuzo Aida from the University of Tokyo, promises healable glass that could potentially be used in phone screens and other fragile devices, which they say are an important challenge for sustainable societies. The researchers claim that the new material is the first hard substance of its kind that can be healed at room temperature.

“High mechanical robustness and healing ability tend to be mutually exclusive,” wrote the researchers, saying that while some hard but healable materials have been developed, “in most cases, heating to high temperatures, on the order of 120°C or more, to reorganise their cross-linked networks, is necessary for the fractured portions to repair. It is highly robust mechanically yet can readily be repaired by compression at fractured surfaces”.

The properties of the polyether-thioureas glass were discovered by accident by student Yu Yanagisawa preparing the material as glue and finding that when the surface of the polymer was cut the edges would adhere to each other They healed to form a strong sheet after being manually compressed for 30 seconds at 21°C, regaining original strength after two hours. He hopes it becomes a new environment-friendly material that avoids the need to be thrown away if broken.