Sola’s armband keeps wearers comfortable regardless of the elements

Sola has launched an Indiegogo campaign for the world’s first wearable device that regulates the wearer’s body temperature, detecting current body temperature and changing it by as much as 0.4 degrees Fahrenheit on-the-fly. 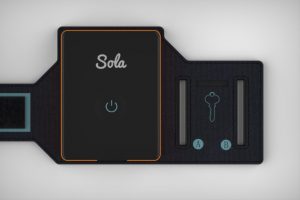 The wearable heating system is worn as an armband, providing controllable heat in any environment. Powered by a 2000mAH battery, Sola can provide up to four of continuous heat. It’s operated by a single button which powers the device on or off. Once on, patent-pending smart algorithms collect information from dual temperature sensors, then determine the precise amount of heat to deliver.

Sola works by regulating the temperature of the blood. As blood flows through the arm, it’s warmed slightly by Sola, before being naturally circulated throughout the rest of the body. This slight increase in temperature can have a dramatic impact on comfort level of the wearer.

Sola features three layers of protection for a safety-first approach. First, each battery has built-in current and voltage protection. Second, a physical fuse will shut Sola down if it detects too much current. Third, a smart monitoring system monitors temperature and current, shutting down the device if either gets too high.

Sola is made of medical-grade silicone and laser-cut neoprene fabric, so it feels sturdy on the arm, looks great, and is designed to last. The subtly curved edges and soft-touch silicone case accentuate the meticulous attention to detail in Sola’s design, and one-button operation makes the device dead simple to operate.

Sola was created by Jason Yakimovich, an engineer by trade from the University of Toronto and a Canadian by residence. Jason founded Divvyi, a file-sharing app, and FuelWear, a heated clothing base layer. Sola is the result of his extensive engineering know-how, the help of UofT Hatchery, his experience at FuelWear and the frigid Canadian climate.

Sola keeps its wearers comfortable whether they’re trekking through the November foliage or simply lying around the house. It’s perfect for anyone who regularly spends time outdoors, or for anyone who wants to save money on their heating bill. If features USB charging, automatic shut-off, premium neoprene construction, an LED indicator and, of course, smart temperature control.