Inductive eddy current technology is an extremely versatile non-contact method for measuring an object’s position, distance, or vibration. Unaffected by environmental contaminants or target finish characteristics, these sensors can operate in a vacuum or in fluids, so they work well for dirty applications, like those with oil or dust present. To get the most out of eddy current sensors, follow these tips for reducing errors that can affect a measurement’s accuracy. 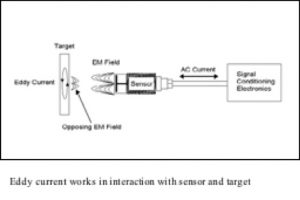 Inductive eddy current sensors operate by generating a high frequency electro-magnetic field about a sensor coil, which induces eddy currents in a target material. Eddy current sensors require a conductive target (usually some sort of metal), and sensor performance is affected by target material conductivity. Nonconductive material between the sensor and the target is not detected. The sensors do not require a ground connection to the measuring system. Measuring distance is typically 30-50 percent of sensor diameter.

Inductive eddy current sensors have a large spot size compared to other technologies. They also have a higher frequency response, an advantage when measuring something moving very fast. This can make them a better choice than contact technologies like linear variable displacement transducers (LVDTs), which can interfere with the dynamics of the object being measured. Touching something that is moving to make a measurement adds mass, slowing down the system so it is not being measured at the actual speed.

Eddy current performance is affected by temperature changes, but can ignore contamination that would foul up laser triangulation/ LED, ultrasonic, or capacitive measurement technologies.

Care must be taken to avoid common error sources associated with eddy current sensors. If not, users may not get a good measurement, may get more error than can be tolerated for the application – or they may not be able to get any measurement at all.

The main sources of error in eddy current measurement sensors include: