The case for SPE in industrial applications

Questions remain surrounding the standardization and benefits of SPE

While Single Pair Ethernet (SPE) promises to revolutionize industrial applications with speeds up to 1Gbps over a single pair, there are still questions surrounding standardization and the benefits of SPE when compared to industrial RJ45 and other standard products.

SPE enables 10Mbps, 100Mbps and 1Gbps transmission speeds using a single pair of wires and allows for both point-to-point and multi-point communications. At 10Mbps over long distances (up to 1000m), SPE brings the Internet Protocol (IP) to field devices, thus enabling full duplex communication and power up to 50W over a single wire pair with existing M8 and M12 interfaces. At 1Gbps over shorter distances (up to 40m), SPE is a miniaturized solution for high-speed performance. Because SPE uses a single pair for data transmission and can deliver enough power to field devices without the need for specialized cables, it is a cost-effective and compact alternative for implementing industrial Ethernet in the field and that allows for field termination with the use of field wireable connectors.

The International Electrotechnical Commission (IEC) has published various standards for shielded and unshielded Single Pair Ethernet connectors under IEC 63171. Each of these standards addresses a specific application area for Single Pair Ethernet based on solutions proposed by industry manufacturers and intended to address a specific market segment. As such, there are seven different specifications derived from the basic standard IEC 63171 and cover circular or rectangular connectors for balanced single-pair data and power transmission. The specifications, denoted with a ‘dash’ symbol and a number after ‘IEC 63171’, may differ in ingress protection (IP) rating, port density, end application, etc., as defined by IEC. For simplicity, we will refer to the variants as ‘Type 1’ through ‘Type 7’.

Type 2, type 5, type 6, and type 7 have been identified as suitable for industrial applications, with type 2, type 5, and type 7 meeting requirements for mechanical robustness, vibration, EMC compatibility and various pollution degrees. Among the connector features that differentiate the connector variants it is worth mentioning that Type 2 and type 5 connectors are the only ones within the list of specifications to feature a consistent mating face that is intermateable and interoperable for IP20 (unsealed applications) and IP67 (harsh environment applications). This allows for the square type 2 connector to mate into a circular connector in instances where testing or verification of the circular interface is required. Type 2 connectors are approximately 50% more compact than RJ45 mating faces and approximately 38% more compact than type 6 connectors deeming Type 2 connectors the smallest interface available for IP20 industrial SPE applications. 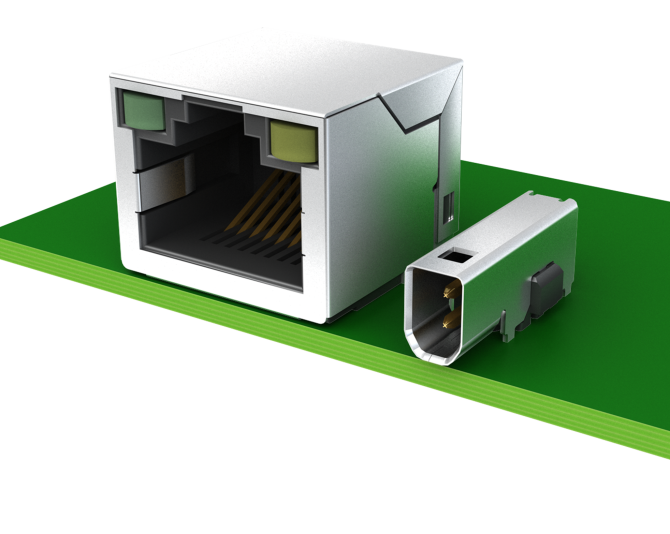 The Institute of Electrical Engineers (IEEE) is also working on specifications for Single Pair Ethernet and unlike IEC who defines requirements for connectors and cabling, the IEEE only defines the requirements for ethernet transmission and does not specify the connector interface. The scope of IEEE standards for single pair ethernet, as described in the IEEE website, is to specify the physical layer and management parameters as well as associated power delivery over a single twisted-pair copper cable, published under IEEE 802.3cg for 10Mbps (10Base-T1), IEEE 802.3bw for 100Mbps (100Base-T1) and IEEE 802.3bp for 1Gbps (1000Base-T1). Currently, IEEE is working on enhancing the 10Base-T1S specification for multidrop applications through working group IEEE 802.3da with the purpose of defining larger topologies as many industrial applications begin to transition from legacy non-ethernet networks to ethernet. Additionally, other working groups are looking to address the reach of 100Mbps and 1Gbps standards by extending the lengths from 100m to 500m in the case of 100Base-T1 and from 40m to 100m in the case of 1000Base-T1 as part of the working group IEEE 802.3dg.

As non-ethernet networks using legacy connectors and protocols start to migrate into ethernet networks, IEEE has also worked to address two different configurations for 10Mbps SPE; 10Base-T1L addresses longer distances, up to 1000m, and 10Base-T1S addresses shorter distances, up to 25m and potentially 16 multidrop nodes. These specifications also address Power over Data Line (PoDL) requirements for both long- and short-range applications with multiple power classes up to 50W.

SPE vs RJ45: What are the differences?

Industrial Single Pair Ethernet solutions like type 2 and type 5 can also support 10Mbps, 100Mbps and 1Gbps ethernet, but unlike Fast and Gigabit ethernet, it can do so with a single pair configuration. Type 5 connectors are available in either a M8 or a M12 housing with Ingress Protection (IP) rating IP67and have been designed with the mechanical robustness and reliability required for industrial applications, also known as M3I3C3E3. Additionally, Single Pair Ethernet extends the reach of traditional ethernet from 100 meters to 1000m over a single twisted pair.

SPE is a much more compact solution for both Fast and Gigabit Ethernet and utilizes less cabling than standards solutions for both speeds which can translate into cost savings and shorter termination times.  In addition, the SPE Industrial interface is also specified for slower speeds (10Mbps) which is ideal for devices that do not require fast ethernet speeds but could benefit from switching over to the Internet Protocol.

Besides standard Industrial Ethernet solutions on the market, other protocols for industrial applications can also benefit from SPE deployment.  I/O Link and PROFINET are both communication standards for connecting digital field devices to controllers in industrial applications.  I/O Link works over an unscreened 3-wire cable and features speeds up to 321Kbps over no more than 20 meters using M5, M8 and M12 connectors. PROFINET, on the other hand, is an implementation of 100Base-TX featuring two pairs for data transmission and reaching up to 100Mbps over distances up to 100m.  The figure below shows a comparison between I/O Link, PROFINET and SPE cables featuring a M8 housing.

With a wide range of speeds supported within a single connector solution, SPE can be the ideal upgrade to both I/O Link, PROFINET, and other industrial communication standards. 10Mbps SPE could become the logical progression from I/O Link and other lower speed standards by enabling increased data transfer over much longer distances (up to 1km) and less cabling (two wires). Likewise, 1Gpbs SPE has the potential to upgrade 100Base-TX PROFINET by delivering much higher transmission speeds going from 100Mbps to 1Gbps over half the amount of cable.

As application areas begin to transition to ethernet protocols and field devices continue to require increased transmission capacities, SPE has the advantage to deliver both fast and gigabit ethernet combined with power over a simple two-wire interface, making it easier to implement ethernet from the field to the cloud.

We already see end-users, vendors, system integrators and component manufacturers come together to publish specifications (IEC, IEEE) that address SPE implementation for their specific market areas. Such collaborations and partnerships highlight the importance of Single Pair Ethernet for industrial applications. SPE has the advantage to enable high speed communications over a single pair and allows for the use of standard industrial grade housings proven to withstand the harshest environments, making it a suitable upgrade for both low speed and high-speed protocols with a single connector interface.

Phoenix Contactis a global market leader and innovator for electrification, networking, and automation on the path to a smart world.