Teardown reveals BEAM Smart Button packs it all in 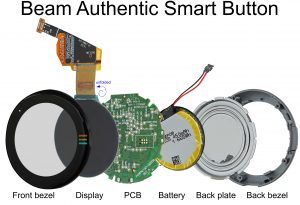 A new and unique wearable device hit the market this year- a wireless, wearable button. The BEAM Authentic Smart button is a battery powered 400×400 1.4” round AMOLED color display that is worn on clothing, handbags, or backpacks to convey a message. The content for the button is created on a smartphone and then sent to the button via Bluetooth (BT). In addition to conveying the wearers’ current beliefs, for example, the button has a nice safety feature: a panic button on the side of the display is used to send an SOS message including GPS coordinates to a predefined number. The panic button does not send the message directly but rather it triggers the user’s smartphone to send out the message, so the smartphone does need to be nearby.

The BEAM Authentic Smart Button is surprisingly packed with components. Here’s a look into what makes the US$99 Smart button smart: 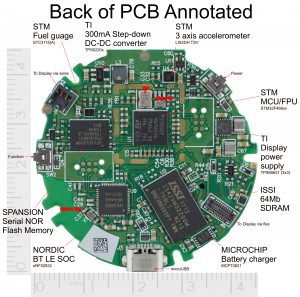 There are two sensors in the BEAM Smart button. A light sensor is used for adjusting the brightness of the display and an accelerometer from STMicroelectronics (LIS2DH) to monitor the orientation of the button.

The power management within the BEAM Smart button is comprised of four chips. A battery charger from microchip (MCP73831), a fuel gauge from STMicroelectronics STC3115), and a couple of regulators (TI TPS65631, and TI TPS6220x). These chips are minimal but get the job done.

For more teardowns by ABI Research, check out https://teardowns.abiresearch.com