ABI Research recently tore down the Xiaomi Tech Mi Sphere camera, which is one of a growing number of 360 cameras that are used to capture content for virtual reality playback systems. 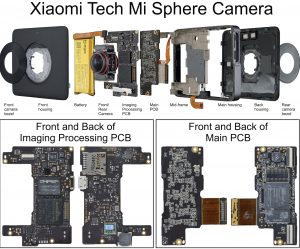 What makes Xiaomi’s version of a 360-degree camera different is their ‘focus’ on keeping the camera thin? The camera is 7.8cm x 6.7cm with 2.1cm thickness at the thickest point (center of the dual camera lens), and 1.3cm thick throughout the remainder of the device. This is quite thin when compared to most 360 cameras on the market (like the 3.15cm thick Essential 360 camera recently torn down by ABI research). The main feature enabling the thin form factor is the camera module.

A typical 360 camera places two identical cameras back to back. One camera capturing everything in front and one camera capturing everything in the back. The outermost lenses on both sides are very wide-angle lens capturing everything up to 90 degrees in all directions from the direction the lens is facing. Xiaomi does the same thing in the Mi sphere, but instead of focusing the light straight from the light source to the imager, it uses an internal mirror just after the outermost lens. This allows for a deep stack of internal focal lenses without sacrificing thickness (adding lenses increases the width, but not the thickness). 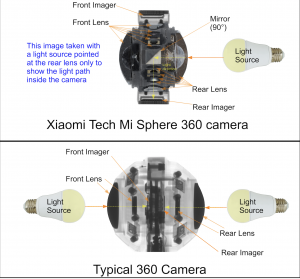 Here are the electrical components found in the Xiaomi Mi Sphere:

As in many designs, Broadcom (Cypress) wins the connectivity design via the BCM43438 combination Wi-Fi/BT/FM/wireless charging IC. In this instance, the BCM43438 is found in a 7mmx7mm module containing Rs, Cs, Xtal, and a ceramic filter.

The sensors within the Mi Sphere include a combination accelerometer/Gyro from Bosch (BMI160) and two mem microphones from Akustica (AKU143).

The audio and power management section of the Mi Sphere is made up of several suppliers. GMT supplies the PMU/Charger (G2206), Realtek for the audio codec (ALC5660), TI for the USB hub, SiTime for the 32Khz clock, and Qualcomm for the Quick charger (SMB1351).

There are two memory chips in the Mi Sphere:  A Samsung 1Gb DDR3 SDRAM chip for the FPGA, and Chipsip 2Gb Nand Flash/4Gb DDR3L SDRAM combination chip for the video processor.

This camera sports three processors. A video processor from Ambarella (A122s), an FPGA from Xilinx (XC6SLX25), and an 8b MCU from STM (STM8L151G6).

These findings are from ABI Research’s Teardowns (https://teardowniq.com/), which include high-resolution photos and x-rays, pinpoint power measurements, detailed parts lists and block diagrams.

For more teardowns by ABI Research, check out https://teardowns.abiresearch.com