Marking its 40th anniversary this year, EP&T features this special column throughout 2019, providing readers with a peak at our past, while paying homage to our history

In this issue, A Look Back puts it focus on Mitel Corporation, the darling of the electronics industry in Canada in 1979. In its fifth year of operations at that time, Mitel had grown rapidly from a $300,000 start-up to $21.6-million in 1979 – and, was expected to eclipse $42-million before its fiscal year was out. With expectations of 10% growth per month, Mitel had just moved into its sprawling 85,000-square-foot facility in Kanata Ontario (just outside of Ottawa). 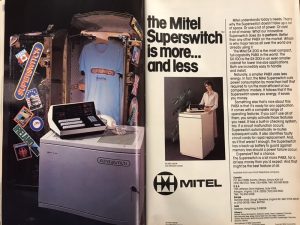 Founded in June of 1973 by Michael Cowpland and Terry Matthews, the pair formed the corporation with the blessing of their employer, Bell Northern Research (based on the original premise that it stood for “Mike and Terry Lawnmowers”), in order to protect their intellectual property rights of tone to pulse converter design from their employer, who otherwise would have legal ownership rights.

According to Wikipedia, Mitel’s first shipment of three lawnmowers was lost in shipping, so they quickly adjusted to produce a telephony tone receiver product (a tone-to-pulse converter for central office use based on Cowpland’s Ph.D. thesis). Cowpland has also stated that the lawnmowers were not suited to Canadian lawns.

Following the success of the tone receiver, the founders extended their interest in the telecommunications industry. Early on, the pair realized the significance of the then-new microprocessor and software technology to the design of telecom switches. In 1975, they introduced the SX200 PBX. The company grew at a rate of over 100% per year for several years. They reached the $100 million annual revenue mark by 1981.

Coverage of Mitel’s success which appeared in the November 1979 edition of EP&T, read like this:

“Right from the beginning, Cowpland and Matthews have opted for high volume, competitive products. But, in order to be successful and a leader in the market dominated by the giants of the telecommunications industry, they have spent considerable sums in developing new and innovative approaches to existing markets. The progressing of new products also shows a definite trend towards larger and larger systems as the company grows.”