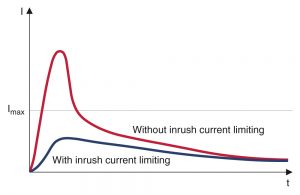 Inrush current limitation is needed to prevent the current from exceeding the critical level and either blowing fuses or destroying the rectifier.

When there is demanding temperature and power conditions, PTC thermistors offer more consistent and reliable protection against inrush current surges and short circuits, while providing accurate temperature control and measurement.

In active inrush current limitation an ohmic resistor, an NTC thermistor, or a PTC thermistor can be used as an ICL component.

Most engineers normally take one of two approaches to limit this issue. First, they may utilize an inrush current limiting protection device (passive ICL circuit). Second, they may employ the use of an active bypass circuit which activates after any inrush current peak wanes (active ICL circuit). The decision of deciding which current limiting method should be employed depends on variables including power rating, the frequency at which the equipment is likely to be exposed to inrush currents, the operating temperature range and system cost requirements.

Passive ICLs have several limitations – especially in very small power supplies with low power ratings of just a few watts. The simplest solution in this case is to add an ohmic resistor in series with the load, however, the power loss of a fixed resistance would significantly weaken overall efficiency in power supplies with higher power ratings. As a result, NTC thermistors have become the standard ICL solution where passive current limitation is needed up to approximately 500 watts.

Because NTC thermistors are high ohmic when cold and low ohmic when hot, the high initial resistance of the NTC ICL absorbs peak inrush currents when in a cold state. However, the resistance of the ICL then drops to a few percent of its value at room temperature which reduces the power consumption of the inrush current limiter in continuous operation. This is why NTC ICLs may be left in the circuit after the capacitor is fully charged.

Once the power rating approaches 500 watts passive circuit solutions become less effective and their weaknesses manifest themselves more clearly. Considering that the design of power supplies increasingly focuses on eliminating power losses wherever possible, passive ICLs are not the ideal solution in these applications. This is because they are always in series with the load and as a result cause too much power loss. The higher the power rating of the device and the longer its typical run time, the more substantial parasitic power losses occur.

In applications where the power levels exceed 500 watts, bypassing the ICL using relays or triacs once the inrush current peak has decayed is the standard method. In such applications, the active inrush current limitation circuit can employ a power resistor such as a NTC thermistor or a PTC thermistor as the ICL component depending on various requirements. For example, PTC thermistors are typically used in the on-board chargers of plug-in vehicles (both pure electrical and hybrid) where power ratings are only a few kilowatts.

In addition a NTC ICL must completely cool down before it can limit the charging current again. The typical cool-down time for a NTC thermistor is between 30 and 120 seconds after it stops receiving power, but is also affected by ambient temperature and mounting method. In many applications, the cooling period is fast enough, but inrush current limitation is required before the NTC has cooled down enough to work. This is the case in applications where a quick active discharge of the DC link capacitor is possible, for example, in inverter-driven home appliances such as modern washing machines and dryers. The necessary cool-down time can also be critical after short power outages.

When the system begins to receive power and the temperature of the component is the same as the ambient temperature, PTC ICLs normally have a resistance of between 20 and 500 ohms. This is adequate to limit inrush current surges. The PTC ICL is bypassed once the DC link capacitors are satisfactorily charged.

In addition, the PTC thermistor can protect the circuit if there is a malfunction in the charging circuit. When current flows through the PTC thermistor, it heats up and its resistance increases, making it self-protecting and providing a significant advantage to other forms of inrush current limiting. Thanks to these properties, PTC thermistors are better in applications where a capacitor short circuits or where there is a failure of the switching element causing the current limiting element to not be bypassed after the DC link capacitor is charged. However, both of these failure modes result in thermal stress to the current limiting device.

There are two ways to protect the ICL component from damage during such events. The most ideal is to use a PTC thermistor, while the second is to implement another power resistor with ample power ratings to take in to account these surges. While this second one may not always be practical, PTC ICLs are designed to survive being directly connected to the supply voltage even at their maximum rated voltage which makes them suitable in nearly every application where this could be an issue.

In case of short circuits that cause excessive currents, the temperature of the PTC increases, which in turn leads to a significant rise in the device’s resistance. Consequently, the PTC thermistor itself limits the current to uncritical levels.

And, as no additional current limitation is required because these PTC ICLs are self-protecting it reduces the cost of the system.

TDK’s portfolio of EPCOS PTC thermistors are particularly suited for the inrush current limiting. Compared with PTC thermistors, they use a more homogeneous ceramic material, which improves reliability while permitting processing by reflow soldering. Thanks to these properties, the PTCs satisfy the rigorous requirements even in the most rugged electronics applications.

* Their ICL functionality is not affected by extreme operating temperatures.
* Effective inrush current limiting as soon as load is turned off, cooling already takes place during normal operation.
* They are self-protecting against current overloads caused by circuit malfunctions.

PTC thermistors are designed to have only a very low resistance in the region of a few ohms at their rated temperature. If there are surges in the current, their power dissipation increases and the thermistor heats up causing resistance to increase and, thereby limiting the current. Only when the component has cooled down does it return to its low resistance state. This behavior makes PTC thermistors ideal as current limiters in most applications.