A Look Back: Celebrating four decades of electronics design

Marking its 40th anniversary this year, EP&T feature this special column throughout 2019, providing readers with a peak at our past, while paying homage to our history.

In this issue, A Look Back puts it focus on a Technology Report which appeared in EP&T’s November issue in 1979. The article, titled: Multiple-processor computer aims at first-time business users, details a ‘state-of-the-art’ computing system produced by independent Canadian manufacturer, Megatel Computer Corp. Inc. of Toronto. 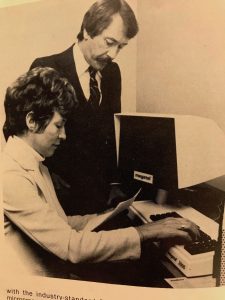 Called the Megatel 2000, the computing system was created to capture the burgeoning market for low cost, small business data processing equipment. The unit used multiple processors and was packaged on a single printed circuit board (pcb). The basic system consisted of a central processor with 64 kbytes of main memory, a dual floppy disc drive capable of storing 2 megabytes of date, a 9-inch visual display unit with keyboard and a system printer.

What made Megatel 2000 unique was the fact that it contained less than 70 individual components. This low component count helped increase reliability within the system’s user base of small businesses. The central processor, CRT controller and disc controller were all contained on one pcb built into the keyboard unit.

“Our customer base are users who will accept the system as it is,” stated Megatel president Geoff Treseder. “We find that most customers don’t want changes to our system, which has been developed to be a flexible and comprehensive package suitable for handling just about all of the normal accounting and related functions found in small businesses today.”

The system’s CRT screen could display up to 128 characters by 28 lines, and since a programmable 8×8-dot character generator is used, lower case letters and special graphical characters are available.

With a real-time clock and maskable priority interrupt system, the unit was capable of handling ‘on-line’ and batch applications. The Intel CPU handled all I/O operations using a group of LSI controllers. Several bipolar processors were used in the system in addition to the main one. A system control processor (SCP) resolves requests by the CRT controller and main processor for system resources. Internal microcoding has been designed to optimize throughput between different components in the overall system.

Back in the day, distributors and dealers of the Megatel 2000 system could deliver software customizing changes if necessary, as Fortran, Cobol, Basic, Pascal and Assembler were supplied.

At the end of the article, the story concluded that Megatel was working on two newer computing designs with upgraded capability. While not yet finalized in 1979, one of these new units would support up to 128 kbytes of main memory, feature multiple CRT screens and a 20-megabyte Winchester-technology disc drive.