HardTech, a technology-focused conference, featuring prominent thought leaders that are putting Canada on the map for hardware and semiconductor innovation, delivered on its mission of inspiring.  Only in its second year, the hybrid event was hosted at ventureLAB in Markham ON last week, drawing approximately 200 attendees and participants, including new and established tech founders and CEOs, investors and advisors, enterprise, government and media.

Hardtech has grown to reach a global audience that discusses ideas, opportunities, and challenges surrounding hardware and semiconductors, according to Melissa Chee, CEO of ventureLAB, a global founder community for hardware technology and enterprise software companies in Canada.

“What we are trying to do is bring to the table the voice of the industry – the ‘who’s who’ in terms of the founders and CEOs of players globally as well as here in Canada,” Chee said in advance of the event. “We really want to bring to the forefront the importance around this foundational technology of semiconductors – and why it’s been so in the news, really, for the last two years to three years.”

This year, HardTech focused on two really critical domains of interest in terms of semiconductor development, as well as the design of the manufacturer and the economic sectors that impact Canada. The ‘rubber hit the road’ with solid representation from the automotive and mobility sector. The second point of focus was life sciences and med tech. 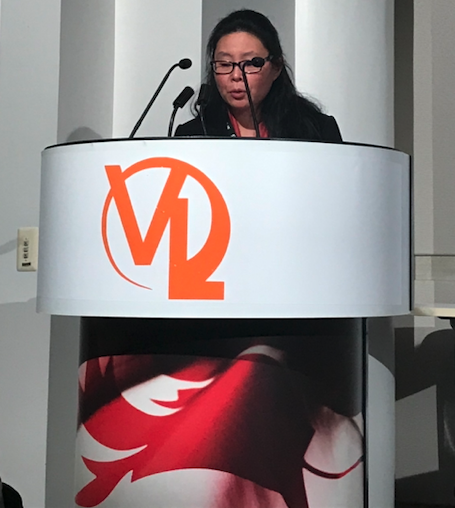 Melissa Chee, CEO of ventureLAB leads conversations on hardware and semiconductor development in Canada, during her address at the HardTech Conference hosted in Markham. Source: Stephen Law, EP&T

“Our goal was to create an action oriented approach around all the different parts that go into semiconductors – not just in building a chip. But, how does that chip get built into a car? How does that chip get built into a medical device? How does it actually impact? You know, Canadian consumers? How does it impact the Canadian economy? How does that provide an opportunity for Canadian founders to really find a niche in a global sector,” Chee states. “We need to leverage our competitive advantage at a more global scale. So it’s all those different pieces going together.”

Capability and the talent coming up

Chee says Canada needs to play a more strategic part in the global ecosystem, which sometimes starts with events such as HardTech, bringing a really critical lens to industry needs.

“So I think that’s really central on why these supply chain supply chain disruptions are not going to go away. Just as Covid is not a two, three year ‘thing’ that we can move on quickly from. This is really important for Canada’s economic development, for our recovery and for national security,” Chee states.

Chee explains that the voice of industry is going to have to play a really significant role in this regard, particularly when it comes to being able to provide, groom, attract and retain the talent that the sectors need.

“I think it is a really important conversation that needs to be had. Because we often talk about tech talent, but the talent that’s required in semiconductors and hardware design is very, very specialized – and quite unique in the tech ecosystem, and very difficult to replicate. Canada is one of the few places on this earth, frankly, that actually has the capability and the talent coming up through the post-secondary system,” says Chee.

A semi fab in Canada?

So, how close is Canada to breaking ground on its first semiconductor fab? Chee states that it all begins with the federal government, which made an important milestone earlier this year, by announcing and assigning a budget line item toward such an endeavour.

“It may sound small on a global scale, but for Canada it is a really important signal to the rest of the world to communicate how it views semiconductors as a strategic and very important priority. No different than AI and/or quantum technology sectors,” Chee adds.

Chee says the right investments from the federal government formulates an understanding that the industry is moving forward and building something here. This can be illustrated by companies like Marvell Technologies, or AMD, or larger semiconductor players such as Astera Labs, that have chosen Canada to set up international design offices, because they know the talent is here.  Chee says that the next mid to longer term trajectory for Canada is to have a fab, which means building the ecosystem now.

“I’m not sure if this means building the latest state-of-the-art fab? That’s going to come over time. But, what we do know is that Canada is a leader in manufacturing, as well as engineering talent. So, I believe there’s an opportunity an I frankly believe that we have to move more quickly,” Chee concludes.